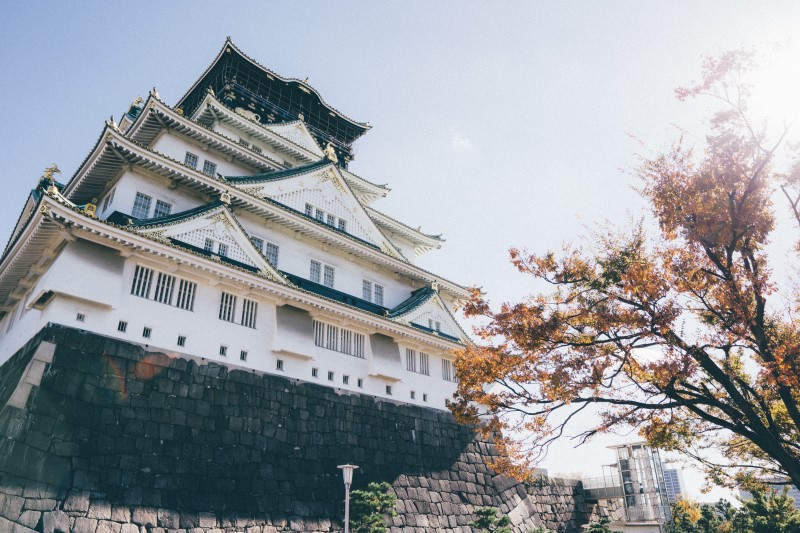 We’ve detailed our love for Osaka’s diverse food repertoire – from the best dishes to eat to some of the most unique dining experiences – food is nearly synonymous with Japan’s eclectic food haven.

Being Japan’s kitchen, the talk around Osaka has religiously been about the bevy of delicious food you can find in the city from restaurants in the largest commercial buildings to hidden ones in the most nondescript alleyways.

All that said, and I can’t believe I’m saying this, but I have to admit that there’s more to travel than trying out local cuisine (gasp!), and more to life than food (larger collective gasp!).

In the off chance you’re into more than just food when travelling, here are 10 things to do in Osaka besides eating.

1. Travel Back In Time At Osaka Castle

Osaka Castle is the city’s prominent historical monument that reminds you of Japan’s ancient, and quite honestly, bloody past.

Built in the late 1500s by Toyotomi Hideyoshi, Osaka Castle has stood (through renovations of course) as a stalwart and imposing façade of Osaka. It was the site of the momentous and bloody Battle of Sekigahara, one that many deem as the most decisive battle in feudal Japanese history.

What was once the site of the famed feudal war is now a museum that chronicles the history of 16th and 17th centuries of Japan. The castle is now fully air-conditioned with some incredible and historically rich exhibits on each floor. At the top floor, you can even get a 360 degree breath-taking view of Osaka City.

Coupled with beautiful and scenic park grounds, it’s no wonder that the Osaka Castle is popular amongst locals and travellers alike.

Universal Studios Japan (USJ) is undisputedly one of the top tourist attractions in not just Osaka, but all of Japan.

Featuring different themed zones such as Hollywood and Jurassic Park, to the ever-popular Wizarding World of Harry Potter, USJ is one of Japan’s most visited theme parks, right alongside Tokyo Disneyland and DisneySea.

With plenty of seasonal events plus your favourite characters coming to life, whether you’re a small kid gazing in amazement at the wonder around you or an adult with flooding emotions of nostalgia, USJ is perfect for you.

Be sure to get the express pass to ensure the smoothest and best experience at USJ! If not you’ll find yourself battling an endless crowd before you even join the queues.

3. Head Up For A Panoramic View At Umeda Sky Building

A structure stands tall in the Kita district of Osaka, with an observation deck offering panoramic views of the city. What I’m talking about is the Umeda Sky Building, one that certainly stands out amongst the skyline of Osaka.

While the majority of the building is leased for offices, there is a “floating garden” observatory perched at the top of this 40-storey twin towers. The Kuchu Teien, or Floating Garden, provides visitors with a panoramic view of the city by way of an open-air deck “suspended” 173m high.

4. Shop Till You Drop At Yodobashi-Umeda

After visiting the Umeda Sky Building, heading to Yodobashi-Umeda is the next logical step.

A massive 13-storey structure just outside of Osaka Station, Yodobashi Umeda is well known for housing the popular Yodobashi Camera electronics chain, which occupies the first six floors of the building.

With near half the building dedicated to technology products and the like, here’s where you want to go for the best deals on electronics. And I’m talking like near an entire floor just filled with camera equipment from cameras to lenses and tripods, all at varying levels of discounts.

The remaining upper floors are taken by clothing shops and restaurants so there’s some diversity in the shopping experience to be sure but make no mistake, you go to Yodobashi Umeda for your new shiny electronic.

5. Swim With The Fishes At Osaka Aquarium

If you love marine life, then the Osaka Aquarium KAIYUKAN is a must visit.

Osaka KAIYUKAN lays claim to the world’s largest aquarium and is segmented into 15 different large tanks representing the different regions of the Pacific Rim. At the centre, and largest of the 15 tanks is the “Pacific Ocean”, a 9m deep, 34m long tank with a whopping 5400 tons of water housing whale sharks, the largest fish species in the world.

With other themed zones such as “Antarctica” and “Japan Forest”, visitors will be treated to a multitude of interactive zones and engage with a large variety of marine animals, making it one of Osaka’s top attractions.

Unfortunately, Osaka Aquarium is currently under temporary closure from 2 March 2020 to 15 March 2020 due to the COVID-19 outbreak. Do visit their website to check on their reopening schedules.

6. Take Photo With The Glico Man At Dotonbori

Dotonbori is one of Osaka’s famed locales, and one of the city’s must do activity happens to be right here.

It’s a time-honoured tradition that almost every traveller has done; taking a photo of/with the Glico Man seems the most natural thing when everyone in Dotonbori is posing the same as the iconic logo.

The Dotonbori canal is the heartbeat of the area, where you can find the Glico Man and other electric neon signboards that come alive at night and larger than life props. The touristy Dotonbori is one of those places that will certainly overwhelm you with crowds that pack the streets.

Embrace the liveliness because that rush of sensations are part of what makes Dotonbori, and Osaka, such an exciting travel destination. There’s some fabulous street food in the Dotonbori area so do give them a try as well!

Head over to Shinsekai, a colourful and historic neighbourhood of Osaka designed in the early 1900s with Western cities of New York and Paris as inspirations. Up in the northern half of Shinsekai is an architecture that should look familiar for many.

Hailed as the Eiffel Tower of Osaka, Tsutenkaku is the prominent landmark of the area, and once the tallest structure of the region back in 1912. Today, remodelling and renovation efforts have turned Tsutenkaku into multiple indoor viewing galleries as well as an outdoor observation deck 94m high.

Shinsekai is definitely worth a walk through; the neighbourhood has a different atmosphere, stuck in somewhat of a limbo – far removed from old world Japan yet not quite the modern marvel of today.

Kushikatsu (deep-fried skewered meat and vegetables) is also a popular dish that originated this area, and there are a few select stalls that you’ll find packed to the brim.

For those who have a yearning to learn and experience Japanese culture, there are a couple of workshops that you can take while in Osaka!

airKitchen offers an interesting 1.5 hours Japanese green tea class where you’ll learn about the intricacies of traditional Japanese tea making and ceremony, a tradition that has close ties to Zen Buddhist principles.

If tea is not your thing, why not try your hands at sculpting?

The Maishima Pottery Museum sits on a manmade island that was built for the express purpose for educating and promoting Naniwazuyaki pottery, made from a type of marine clay found from Osaka Bay, where the island now sits.

With pottery studios that offer basic to advanced levels, you’ll get to bring home your very own Naniwazuyaki clay pottery.

There’s no better time and place to learn from these Japanese masters.

9. Get A Glimpse Of American Culture At America Mura

America Mura is a unique and interesting neighbourhood in Osaka.

Often seen as the neighbourhood at the forefront of the youth culture since the 1970s, America Mura is inundated with clothing shops, hipster cafes, and the like. The neighbourhood got its name from the many import shops that started selling miscellaneous American products back in the day.

Today, it’s a hotbed for flea markets and music performances, becoming a creative commune for the young and hip.

Instead of all the usual things you could do in Osaka, we decided to be a bit different and visit the beautiful Minoh park in search of the Minoh Waterfall. On the way we tried their local deep fried maple leaves and as well saw one of the local monkeys. It's clear that this place is even more stunning during autumn season. Hopefully one day I'll be able to experience it. . . . #explorejapan #japan #osaka #exploreosaka #visitjapan #folkgood #castle #worldtravel #lovejapan #osakacastle #minohpark #culture #superhubs #minoopark #majestic_earth_ #theweekendventure #ishootwithorms #instagood #awesome_photographers #artofvisuals #earthpic #awesome_earthpix #moodygrams #travel #mapleleaves #cunard #jaw_dropping_shots #japanstuff #earthfocus #beautifuldestinations

Osaka can be quite intense and overwhelming for both locals and travellers alike. That, in some part, explains the popularity of Minoo Park, a nature reserve park roughly a 30 min train ride from the city centre of Osaka.

The hike up Minoo Park isn’t all that challenging, but the journey stretches for quite a bit before you are rewarded with a glimpse of the secluded but beautiful waterfall that is plastered all over social media.

If you’re here during the Fall, you can even sample one of their specialties: a maple leaf, fried. Yes, as mind-boggling as it sounds, vendors on the side of the road will offer fried maple leaves as a snack to fuel you as you appreciate the tranquillity and serenity of Minoo Park.

Hong Kong: A Day In The Outlying Island Of Cheung Chau

The vibrant city of Hong Kong offers a wide array of food and attractions like Ocean Park and Disneyland, but for avid travellers who...
Read more
Singapore

Japan is home to some of the world's technological and engineering marvels.And yet, one thing I love about Japan is the country's resolve to...
Read more