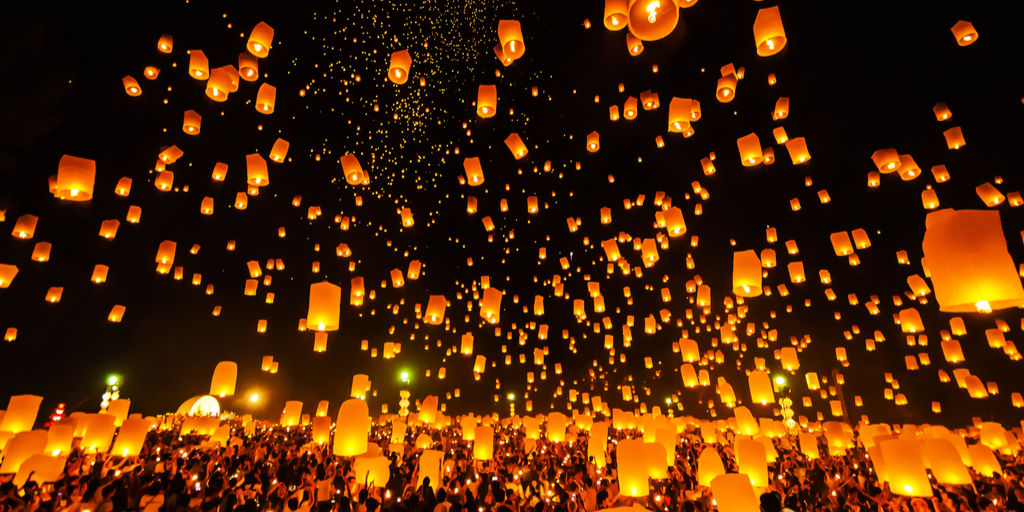 Mention Chiang Mai and most people will have the impression of lazy afternoons and golden temples. They’re not wrong, but Chiang Mai’s unique location in the north of Thailand also means a culture that is especially different. Think Peranakan but Thai-style!

Chiang Mai was a key area of the Lanna Kingdom, partly due to the presence of the Ping river. The waterway’s influence has had such an impact on trade, transport and lifestyle for the people, that an additional festival known as the Yee Peng or Yi Peng lantern festival now precedes the famous Loy Krathong of Thailand, and is an event worth going to for new and return visitors alike.

What is Yee Peng Lantern Festival?

Happening sometime in November as the mercury falls to a comfortable 15-25 degrees, Yee Peng is celebrated on the full moon of the twelfth Thai lunar month or second Lanna lunar month.

What you can expect, is a city transformed by light, sound and colour on such a scale that the whole place feels like a theme park. From colourful lanterns on trees to glittering candles on the streets, Chiang Mai becomes a glowing beacon to all things good for three special days.

Is Yee Peng Lantern Festival the Same As Loy Krathong?

Having Brahmanic origins means that light is always a big part of a symbolic celebration. And while Loy Krathong is about showing gratitude to the River Goddess for a bountiful harvest via a crafted floatable decorated with flowers and candles, Yee Peng is more about paying respects to Buddha and releasing your bad luck, grudges, and suffering through rice paper lanterns floating into the sky. So since these two are cosmic siblings, you can expect a double dose of an illuminating experience, not only for the camera but for your soul as well.

The epicentre of all releases are usually held at Mae Jo University, and big, timed events like these are usually ticketed so don’t think you can just stroll right in! We’re talking about thousands of people— yes, thousands— gathering for a grand cause so some type of crowd control is needed of course. As part of their efforts to prevent fire hazards, the government has also limited areas where such grand events take place. With tighter limitations, it is always a good idea to book tickets well in advance.

If you’re lucky enough to join in, be prepared early and head to the site well before release time. This will factor in the likely traffic jam that will occur, as well as give you time to find a good spot or grab some free food— yes, free because Chiang Mai is generous that way.

An hour before the release, monks in saffron robes will begin their chanting and ceremony and the place falls into a peaceful hush. Wait for instruction— and don’t worry there will be someone guiding you— then release your woes into the sky with thousands of others and enjoy the spectacle.

Beyond the light show, you’ll also find many colourful activities happening around town. This is something they’ve been doing since the 13th century, so you can expect a rich display of tradition, culture and craft.

There’s the Yee Peng Parade that circles the Old City area, accompanied by live music and handicraft sessions. Food vendors will pop up, some with home-made goodies, and expect firecrackers that will light up the atmosphere with a raucous bang. There are also traditional dance shows that might happen, but all in all, as you walk around, you will not see a relaxed city, but a gathering of culture and celebrations.

Other Places in Chiang Mai to Witness the Enchanting Sight

If you’re the sort who fancies a smaller crowd, there are alternative places where informal groups release their lanterns. Try asking about the Cowboy Army Riding Club or Nawarat Bridge from locals and join them— they are particularly welcoming during this period!

Alternatively, if you would like to just bear witness, you can pick out some choice rooftop bars and hotels to see the occasional light-up that floats up during the three-day festival. Sleepwalker Hotel and The Bridge Luxotel is located right beside Nawarat, or hang out by the river at eateries like The Good View and Deck 1.

If you wish to gain some lead time on the others, Le Jardin De Maejo is a quiet little establishment that is much closer to the University for those joining in. And if you’re looking to enjoy some quiet time away from the main city, Horizon Village Resort is located 20 minutes away and has their own botanic garden and waterways for you to unwind after your day in Chiang Mai. Who knows, maybe they might even let you float your private blessings in their compound! 5 Castles in Germany to Live your Disney Princess Dreams