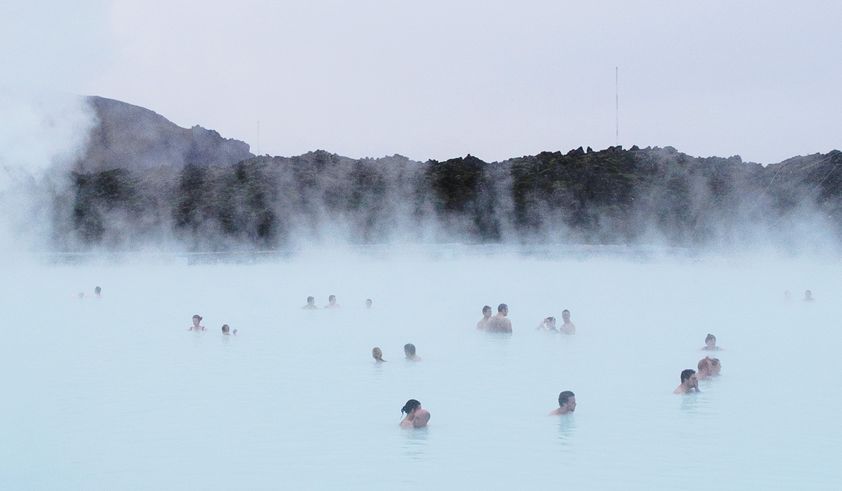 Travelling to the famous Blue Lagoon when in Iceland is a ritual for many tourists. It’s not every day (or any day really) that you get to soak in hot, milky blue waters enclosed within magnificent black rock lava formations.

Winters are an especially memorable experience when the surrounding temperatures dip sub-zero while you’re soaking in a hot geothermic spa (approximately 39°C throughout the year). Part of the draw, of course, is the perception of being immersed in a natural rock lava field, though the reality is that the lagoon is largely man-made.

Regardless, with an experience that feels and looks as magical as the Blue Lagoon, you can expect a crowd, nay, a horde of tourists, and that’s the typical scene at this iconic attraction. Tack on the entrenched bathing culture of Iceland that stretches back to antiquity, the crowds at the Blue Lagoon can get quite dense, making the total experience a less than ideal one.

A large and beautiful pool can become a squeezy and stifling one quite quickly.

Every day is a gift. Today's gift is a big one – we finally get to open our geothermal seabaths in North Iceland. Take a dip in tranquility and book your ticket now www.geosea.is/en #geoseaiceland #geosea #nature #naturebath #seabath #weareopen #openingweekend #joinus #spa #wellness

Enter GeoSea, nestled in the remote village of Húsavík, northeast of the capital of Reykjavik.

Short for geothermal sea baths, GeoSea is one of the latest in a line of natural baths following in the footsteps of the Blue Lagoon and Mývatn Nature Baths. Since the Viking Days – the village of Húsavík was the first place where the Vikings stopped – bathing in geothermal seawater has been an ingrained culture.

So, it really isn’t all too surprising for the village to have their own luxury sea bath.

Built by Basalt Architects (also the people behind the Retreat Hotel at the Blue Lagoon) the location and site of GeoSea played a crucial role in the conceptualisation of this wonderous sea bath in Húsavík.

Located on Cape Húsavík, GeoSea lies beside the prominent yellow lighthouse built in the 1950s to combat dastardly sea conditions and aid seafarers. The lighthouse has since been discontinued and there are plans to rework the interior of the lighthouse to allow for a skywalk over the cliff.

Overlooking the Skjálfandi bay and the North Atlantic, the GeoSea continues the bathing tradition of the past, promising stunning views as you lie back and soak in hot mineral-rich waters in one of their five infinity hot spring pools available.

One of the most magical sights perhaps would be when the elusive and dazzling Northern Lights dance in the night sky above you. Dipping into the pools, with a glass of drink in hand, and an unparalleled natural view constantly changing in front of you, man I would be there already if I wasn’t strapped for cash.

We also hear that Cape Húsavík is home to many flora and fauna, including Icelandic puffins and whales which will surface every now and then, making your Icelandic bath experience a truly unique one.

For a quiet(er) sanctuary with not any less of the magic, Húsavík’s GeoSea infinity pools are one of the best out there.

Visit soon, before they become the next Blue Lagoon.

Successful and cost-effective globetrotting begins with a travel budget, but usually, we would be caught up in itinerary planning and tends to leave exchanging...
Read more
Tips & Trends

AirAsia Group currently operates an exclusive Airbus fleet flying out of its hubs in Malaysia, Thailand, Indonesia, the Philippines, India, and Japan. With its...
Read more