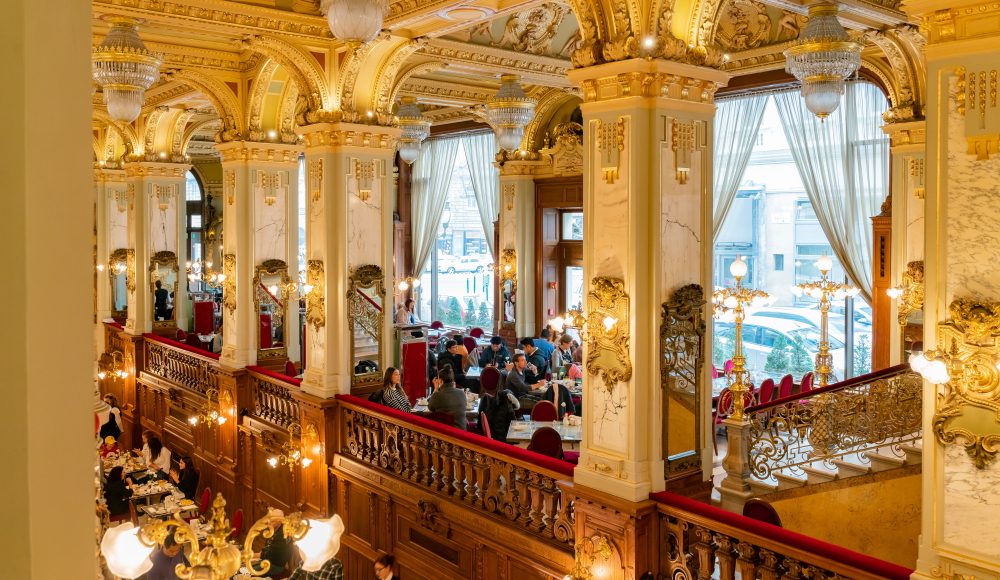 The Most Beautiful Café In The World Is In Budapest

Is this the most beautiful cafe in the world or a palace?

Sitting pristinely on the corner of a street in the downtown area of the Hungarian capital of Budapest, is a century-old majestic building that has enchanted both tourists and locals.

Stepping inside the resplendent building, you may be inclined to think that you’ve been transported to the Hungarian equivalent of the Sistine Chapel. But make no mistake about it, you’re very much still in the peaceful neighbourhood of Budapest.

In fact, the grandiose architecture you’ve entered is oftentimes touted as the prettiest coffee shop in the world — known as The New York Café.

Origins of The Most Beautiful Cafe

First, a short history lesson. The prestigious coffeehouse first opened its doors in October 1894 and the building that the café now resides within was built by the New York Life Insurance Company as a local head office. Apart from its hotel and luxury café roots, New York Kávéház (as it is known locally) served as the centre of Hungarian literature and poetry activities for decades.

It is also here that the literary movement known as “Nyugat” — a name that was taken from a periodical which published poetry and prose by Hungarian writers — was borne.

The New York Café has since lived through many eras, including huge political upheavals and major historical turning points. Yet the elegant coffeehouse remains largely unspoiled, unbroken, and ever-present in the lives of the local creative community which include Hungarian writers, poets, and artists.

Today, the cafe most recent facelift has sparked a renewed sense of interest and international acclaim for its grandeur appearance, both interior and exterior. And it is this universal commendation that has cemented the New York Café as the “Most Beautiful Coffee House in the World”.

Have your cake and eat it too 🍰 Dating back 125 years, New York Café is one of the oldest cafés in Budapest, Hungary. Built in Italian Renaissance-style, with sparkling chandeliers dangling from high ceilings adorned by spectacular frescoes, it's known as the "most beautiful café in the world." (📸 by @joethommas)

Before we drone on and on about how charming this café is, allow us to attempt to properly describe New York Café’s splendour and elegance in our own words.

Influenced by the Italian Renaissance-style, New York Café’s interior statement pieces are the highly embellished chandeliers hanging from the ceilings adorned with artful frescoes and golden patina. Along with that, the sturdy marble columns and stuccoed angels radiates opulence of a bygone era.

In case you were wondering were the most beautiful café in the world is. Thanks to @kevin_heijhoff for sharing his #damoments #newyorkpalace #dedicahotels #budapest #luxuryhotels #luxurytravel #newyorkcafe

Add to that, the unique offerings of traditional Italian cuisine and local dishes, paired with the sounds of chill music and short performances by local actors, and you’ve got a world-class affair on your hands.

Throwback to the most beautiful cafe in the world. @new_york_cafe

Speaking of the menu, New York Café also offers some of Hungary’s most traditional desserts which include around 16 varieties of cakes, Dobos, and Sacher. Furthermore, the classics like beef goulash, fishermen soup, chicken leg paprikash-style, wiener schnitzel, and grilled foie gras are also to be expected here.

Though, truth be told, it’s not the food that people come for — it’s the imperially decadent atmosphere! And these days, New York Café’s clientele comprises mostly tourists rather than the locals. Seriously, the queue to get in the café on busier days can stretch all the way down to the streets of Erzsébet körút, one of Budapest’s main boulevards.

On its busiest days, the café welcomes around 2,000 customers. Indeed, the New York Café’s title of “most beautiful” is truly befitting.

“It’s healthier, it saves the environment, it helps to protect the animals!” Vegan food in Singapore is gaining in popularity in recent years. Ask any...
Read more
Eat & Drink

Jumping on the bubble tea bandwagon, Johor’s own Taman Mount Austin is emerging (or has already ascended) as the next boba heaven in Malaysia....
Read more
Eat & Drink

Ramen, a dish that we all know and love, a dish that some consider the very definition of Japanese cuisine. One of my ultimate comfort...
Read more
Eat & Drink

Japan, famously known for its strong communal mindset is facing a revolution. Increasingly, more and more Japanese are opting to partake in solo activities...
Read more