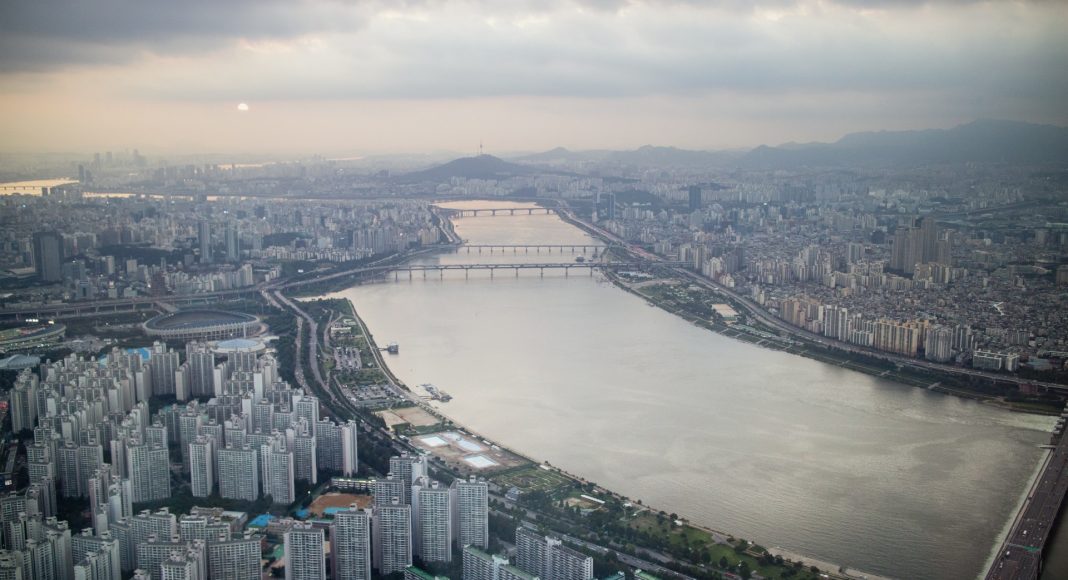 Dining with a View in Seoul

We don’t know about you, but for us, one of the best parts of travel is the chance to indulge in good food, spoiling ourselves with a visit to a swanky eatery we wouldn’t normally step inside.

Because nothing goes better with a fine meal than even finer views, here’s our shortlist of 5 eateries in Seoul where you can indulge in good food and posh settings, while immersed in stunning views.

We have made it folks; we have agriculture in the sky. Well, not exactly.

Nestled 50 floors up The Federation of Korean Industries tower is The Skyfarm, an instagrammable café/restaurant that has stirred up quite the storm in Korea for its beautiful glass house and greenery. It’s a hit amongst the locals (reservation is recommended, especially if you want a window seat) and part of the draw seems to be the offering of a European brunch menu that features items such as Spanish Omelette and King Prawn Tomato Linguine.

If you’re lucky to grab a table by the floor-to-ceiling glass windows, you’ll be rewarded with the Seoul skyline and Han River as you fuel yourself with food and coffee.

When food coma hits, and it will, consider strolling around an actual farm two floors up. While it’s called the Sky Farm, it’s more of a small garden with various plants and herbs being grown.

The tallest restaurant on this list, and in all of South Korea, Bicena is a whopping 81 floors up the Lotte World Tower and housed in the SIGNIEL Seoul Hotel.

A one Michelin Star Korean fine dining establishment, Bicena presents an elevated and modern take on traditional Korean cuisine. The restaurant holds steadfast the cornerstones of Korean flavours and food such as jang (fermented sauces) and kimchi and you can look forward to dishes like abalone rice and steamed king crab with barley porridge.

Prices are steep no doubt but with a panoramic view of Seoul, excellent food, and service, dining with a view doesn’t get better than this.

The N Seoul Tower is one of Seoul’s most iconic building, and the highest vantage point in the Itaewon area. Housed in the 5th floor (the highest) of the Seoul Tower is n.Grill, a restaurant offering exquisite French nosh helmed by Michelin-starred chef Duncan Robinson.

With a rotating view (it rotates ever so slightly that you don’t feel nauseous), n.Grill presents a true 360° view of Seoul’s neighbourhood, from Myeongdong to Itaewon and neighbourhoods of Gangnam and Jamsil.

Offering a couple course menu, we’d suggest coming for dinner service, when the Seoul sky dims, and the lights of the city shine brightly, making for some beautiful and romantic vibes and views.

Offering some splendid views of the Namsan Park Gardens and beyond is La Yeon, a 3 Michelin star restaurant perched on the 23rd floor of The Shilla Hotel (famed for their Duty-Free Shopping).

While the views are nothing to scoff at, this is one establishment where the food certainly carries. The four courses available (two for lunch and two for dinner) are rooted in traditional Korean flavours, and all are paired with desserts and Korean tea.

You’ll notice the choice to add the Sinsello, or Royal Hot Pot to your basic course, and while the price is steep, we’d recommend you to. I mean, you are already savouring at a 3 star Michelin dining establishment, might as well go all out.

Featuring an umami broth with a medley of vegetables, mushrooms, and meats, it’s traditional Korean haute cuisine at its finest, fit for a king.

Walking on the Cloud

Right in the CBD of Seoul is the 63 Square Tower and up 59 floors is Walking On The Cloud. With a classy vibe and some of the best night views of the city, it’s not surprising that it has been featured in numerous television programmes and shows.

Expect decadent European fare like char-grilled beef tenderloin and grilled lobster with champignon cream. Sure, it costs a pretty penny like many of the restaurants on the list, but the expansive views of the Han River justify some of the costs, and if it’s for a special occasion, it’s well worth it.

Photo by JEONGUK – on Unsplash