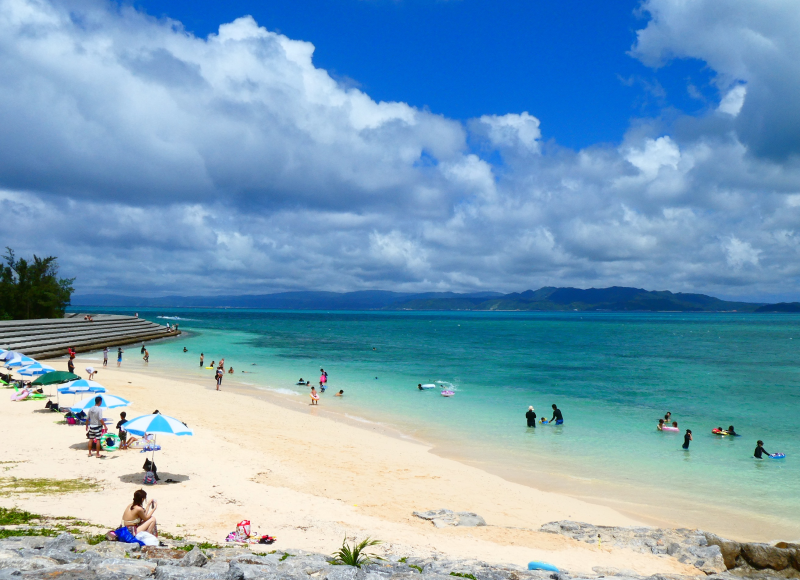 When you think of Okinawa, what comes to your head? To me, I’d thought of it as a resort haven for beach lovers who love basking in the tropical heat, splashing about in the ocean, and burying their feet in sun-kissed sand. Beach resorts are a dime a dozen in Southeast Asia. I’d rather have a true Japanese experience in Japan. But if you ask any Japanese where is the best place to go to in Japan, their answer will be unanimous.

“Okinawa! It’s simply wonderful!” “You should really go to Okinawa! You will love it there!”

I used to roll my eyes internally at their enthusiasm. Yet, after spending just five days in Okinawa, I realised that there was a deeper reason as to why all the Japanese love Okinawa. It was not just the emerald blue waters that Okinawa was famous for. There were so much more to Okinawa beyond the ocean blue. 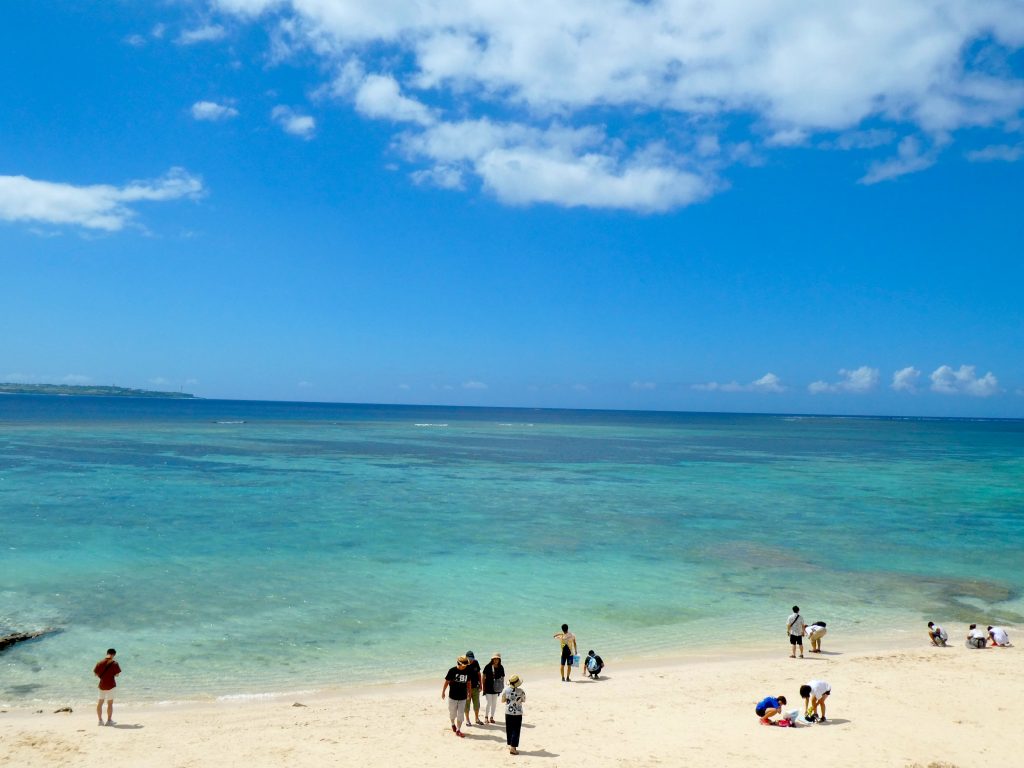 Japan is really HOT everywhere during Summer, except Okinawa.

Okinawa, with a subtropical climate, has temperatures that don’t vary too much throughout the year. It makes for an ideal travelling destination no matter the time of the year. The best months to visit for the beach-goers are usually between June to October.

My husband and I chose to head to Okinawa in August. It was then when I realised that August is a great time to head to Okinawa. Summer in Okinawa is actually cooler and more bearable than other parts of Japan, with its average temperature hovering around 30°C. In case you didn’t know, every summer, the rest of Japan is feeling the scorching temperature of over 40 °C.

However, August in Okinawa is also a period of great typhoons, as I was soon to learn.

Ancient but not forgotten: The Ryukyu Kingdom of Japan

When I reached Okinawa, it felt like a different country altogether. The people there didn’t look like typical Japanese that I knew, and they dressed differently. Everything about their culture seemed more vibrant and colourful than the subdued Japanese culture I was more accustomed to.

The stark contrast between Okinawa and the rest of Japan is also evident in their architecture and cuisine. The uniqueness of their culture stems from their history. Okinawa was once an independent state called the Ryukyu Kingdom, which reigned from the 15th to 19th century. The kingdom was an important trading hub linking China, Japan, Korea and Southeast Asia.

Have you wondered why the traditional Okinawan buildings have those red-tiled roofs? The tiles used on the buildings are made out of Kucha, an iron-rich mudstone unique to Okinawa that turns a beautiful vermilion color when baked! Kucha is used for its heat and humidity-controlling properties. Tiles made out of Kucha absorb moisture from the air, which serves to dissipate heat when it evaporates. This helps to make a much cooler house — perfect for a subtropical island like Okinawa! 📷:@takao.maki #taketomiisland #yaeyamaislands #竹富島 #八重山群島 #다케토미섬 #야에야마제도 #八重山諸島 #シーサー #shisa #redrooftiles #beokinawa #visitokinawa

I was blessed to be able to see the most powerful symbol of their distinct culture, the Shuri Castle, before it was razed to the ground on 31 October 2019. Located in Naha, Shuri Castle was a curious blend of Japanese and Chinese architectural styles unique to Okinawa. 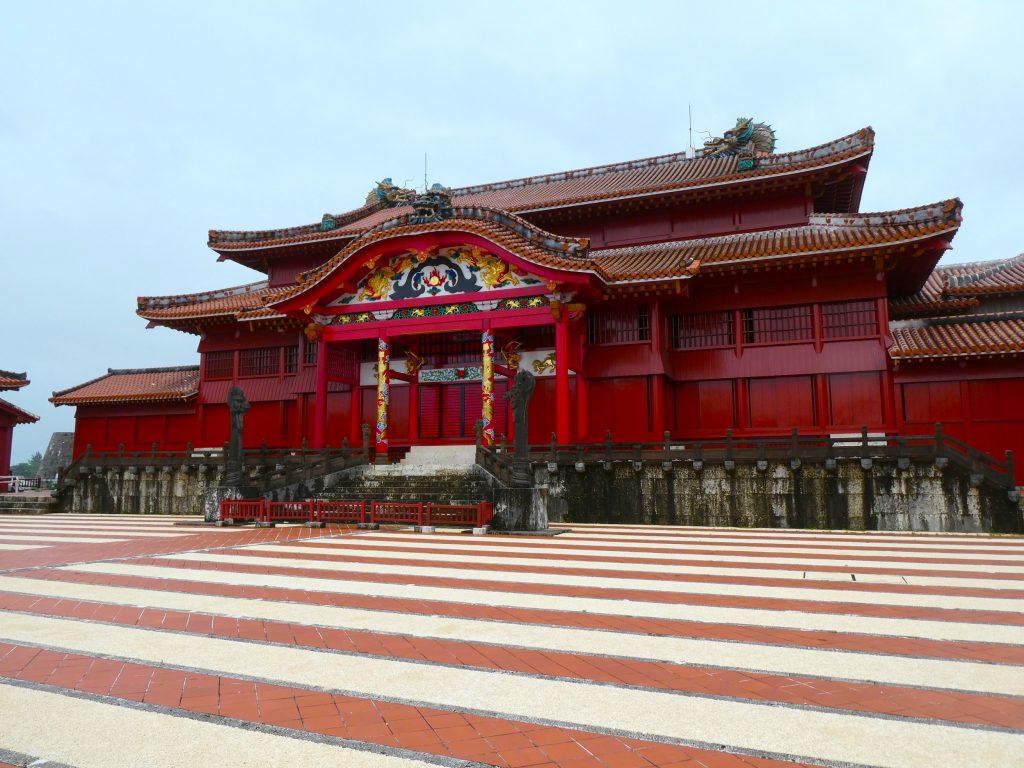 Even with the absence of the symbolic castle, you will still be able to find Ryukyuan culture everywhere you go, from UNESCO heritage castle ruins to shisha (guardian lion) guarding the homes of Okinawan locals. Okinawan cuisine is also reminiscent of Chinese cuisine, such as champuru (stir-fry dish) and rafute (simmered pork belly). 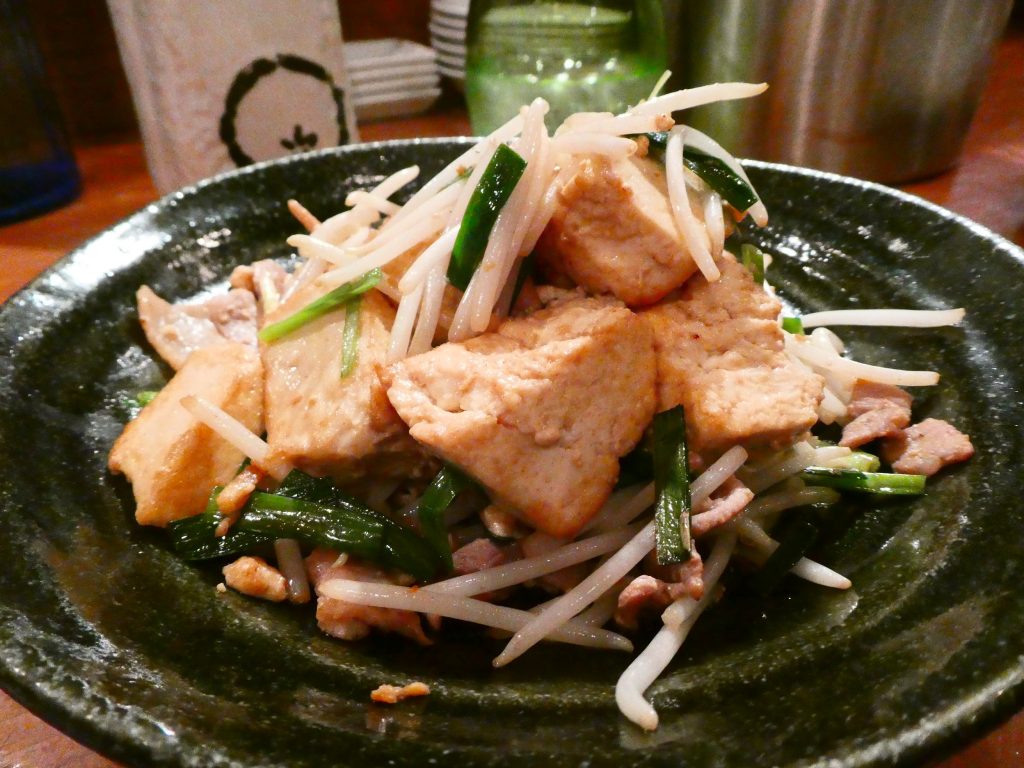 To navigate the main island of Okinawa, you’d have to drive, there is actually no other way you can get around Okinawa. When we first started, I was rather befuddled by the scenery, for we were surrounded by towering trees and majestic rocky mountains capped with greens. Just where were the glistening blue waters of Okinawa?

Turns out Okinawa was a lot larger than I thought. It took hours of driving before I could see the glittering blue of the sea. There was a particularly scenic drive that remains vividly imprinted in my mind. I felt like I was driving over a rolling carpet of emerald water on the 2-km long Kouri Island Bridge leading to the Kouri Island. 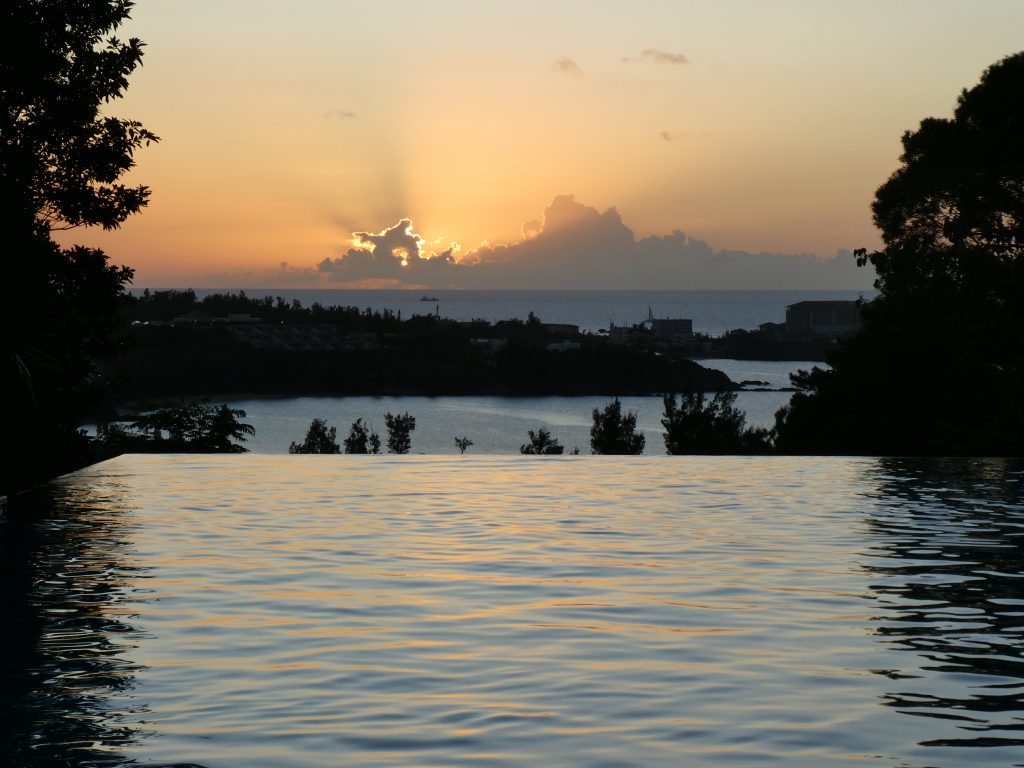 We booked an exclusive resort which is ideal for honeymooners, The Atta Terrace Club Towers, for the resort is only open to people above the age of 16. No noisy kids disturbing your couple time! And the best part of this beautiful resort is that they provide complimentary photo service for couples to have a sweet memorabilia of their stay.

The next morning, we woke up early to swim a few lazy laps before having a luxurious breakfast. There was nary a soul in the pool, which appeared like an endless stretch of blue where the pool and the sea seemingly met.

For lovestruck couples, Kouri Island is a must-visit not just for the scenic drive. It is known to be the island of love for its heart-shaped rocks.  A romantic folklore similar to that of Adam and Eve in which a couple who lived on the island were the ancestors of mankind makes the island even more magical.

A piece of America in Okinawa

By the third day of our trip, the typhoon had truly arrived. The raging winds and pelting rain, particularly at the mountains, made it impossible to continue our exploration of Okinawa’s ancient heritage sites. Disappointed, we drove down towards the city, away from the screeching gale. We were at a loss at what to do next, till I caught sight of a vibrantly coloured object, cheery amidst the gloomy sky. It was a Ferris wheel. Brick streets and warm yellow buildings greeted us, and I was instantly cheered by the lively ambience all around me. 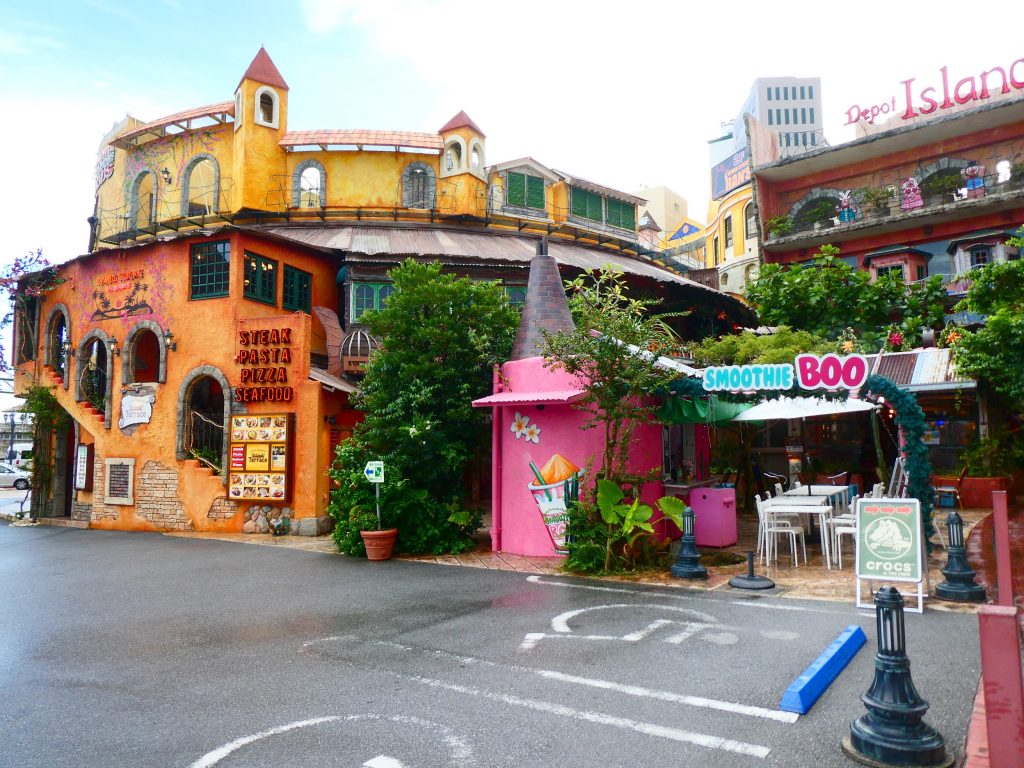 We were at the Mihama American Village, an outdoor U.S.-themed leisure complex in Chatan. We did not include this in our itinerary as we had thought of it as a tourist trap. But we were pleasantly surprised. Colourful and convivial, it was almost like an amusement park without rides, but filled with plenty of whimsical OOTD spots. 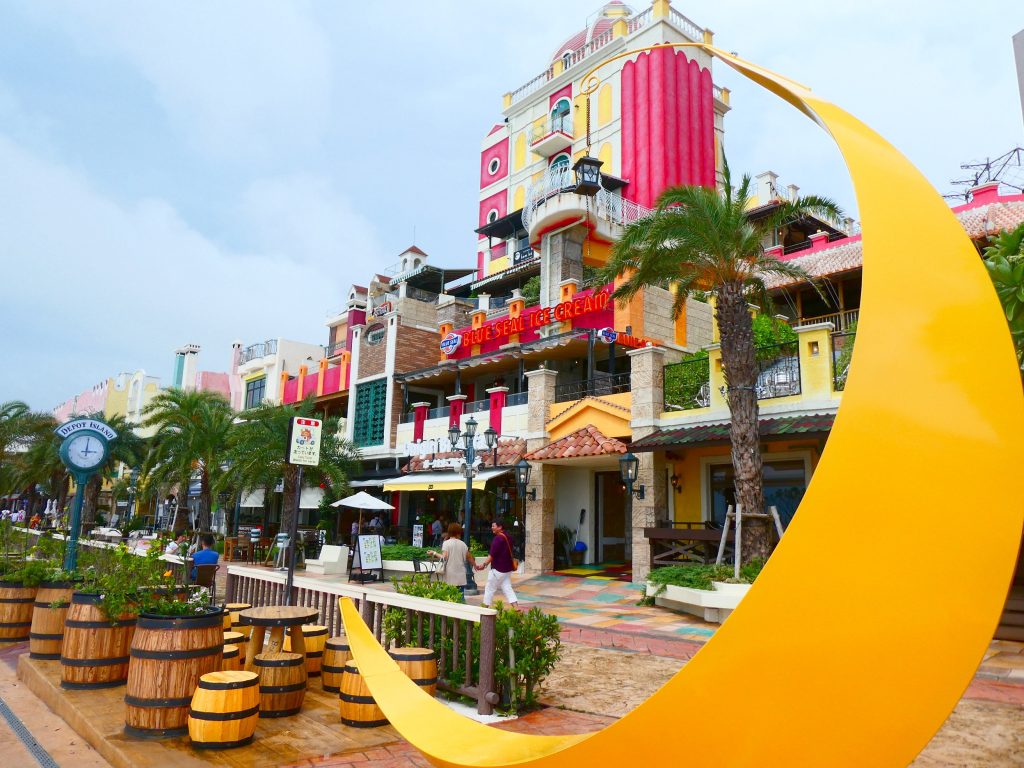 After World War II, Okinawa became the designation location for U.S. military base. This led to the Americanization of some local Okinawan cuisine like taco rice and onigiri sandwiches. And of course, there is no better place to try such dishes than in American Village. 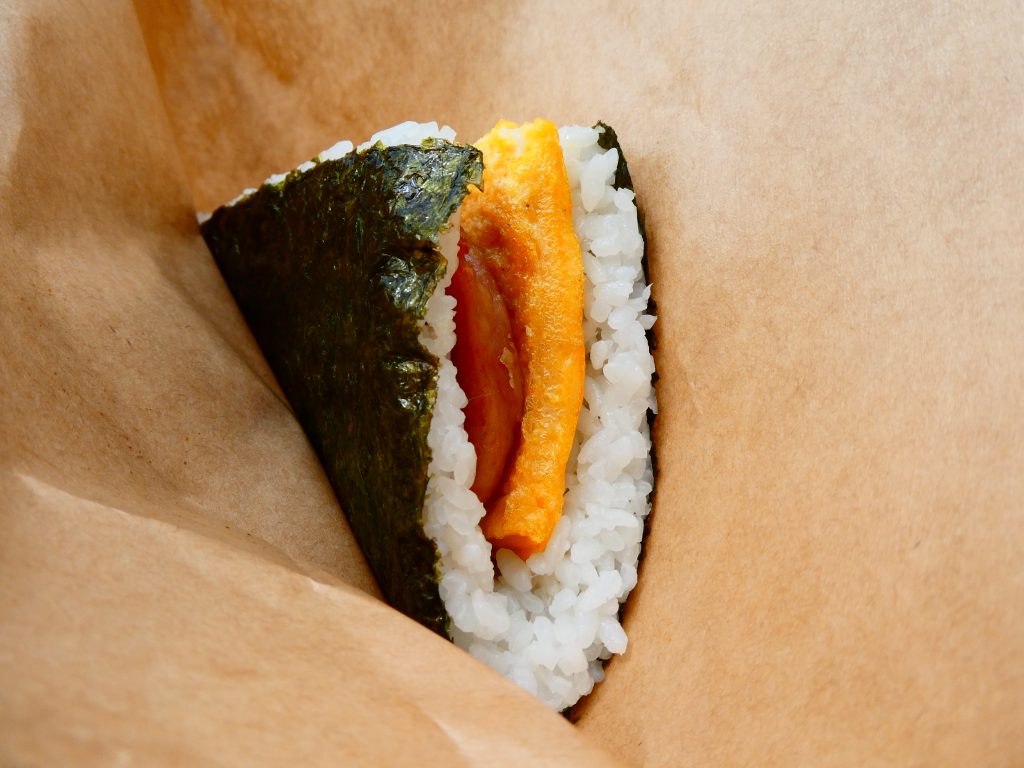 A Part of Local’s Everyday Life in Makishi Public Market

If you’re looking to experience the everyday local Okinawan culture, pay a visit to Makishi Public Market in Naha to sample Okinawan food and interact with the local stall owners. The market buzzes with energy – rows of fresh seafood, raw meat, tropical fruits and vegetables everywhere, food vendors haggling with customers, it was invigorating chaos. 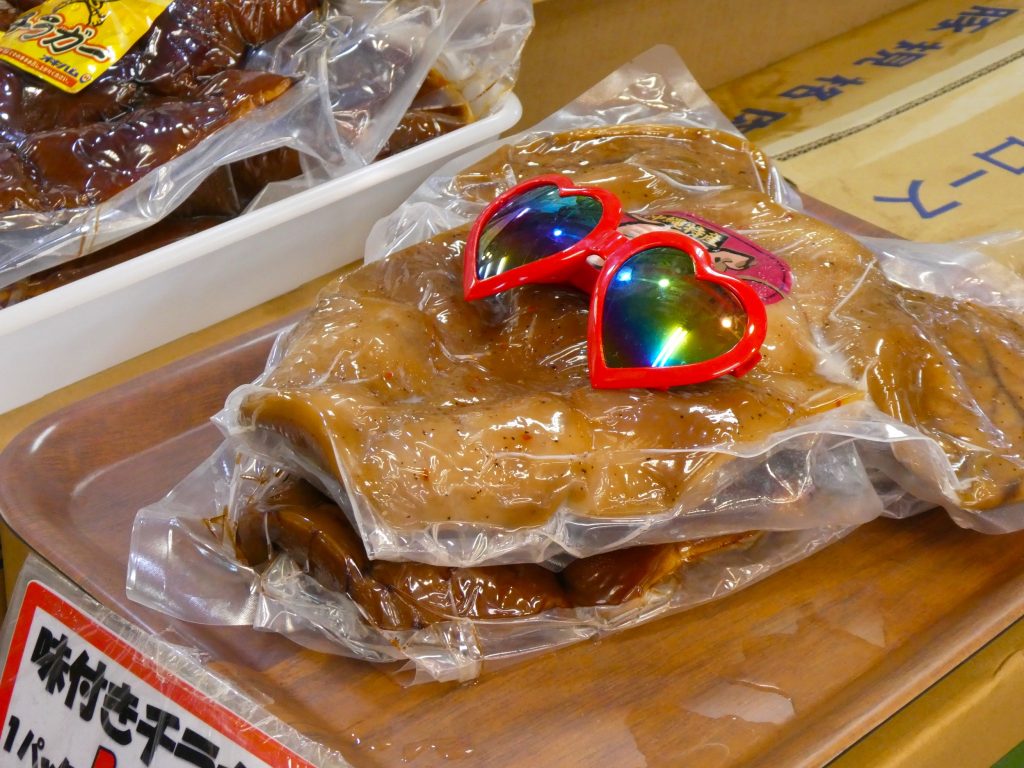 Pork cuts ranging from trotters to innards to even their heads were sold in stalls, true to the saying that Okinawan people use every part of the pig except for their toenails and squeals. All sorts of vibrantly coloured seafood could be seen, as if deliberately arranged to show off their striking colours. Just like the old market, the new market has two storeys, with the first selling fresh produce and the second filled with local eateries. If you prefer, you can even buy fresh seafood on the first floor to have it cooked in one of the restaurants on the second floor.

Makishi Public Market is just a few minutes’ walk from the tourist-centric Kokusai Dori (International Street). The market has been temporarily moved to a new location nearby as the old location is closed for renovation.  With many signs directing towards the new market, it is not hard to find the market. I thought I’d known Japan, and didn’t need to find out more about Okinawa, which I’d wrongly assumed to be just an island paradise for beach lovers. Deeply humbled by the rich heritage and complex history of Okinawa, I learnt that by keeping oneself open to new experiences, one can truly broaden one’s horizons.

“The real voyage of discovery consists in not seeking new landscapes, but having new eyes.” – Marcel Proust

Indeed, travelling to Okinawa has allowed me to see with new eyes, to be open to new possibilities that I’d never imagined. There is still so much out there in the world for me to learn.

All photographs were taken by Seraph Sun unless otherwise stated.

The pictures we paint online are often the most ideal parts of our lives; what the world sees are the perfect moments we capture...
Read more
Travel Stories

Spontaneity is the best kind of adventure.Four years ago, after the third episode of Descendants of the Sun (DOTS in short), in my mind’s...
Read more
Travel Stories

“Next Stop, Raffles Place” goes the overhead intercom.I rejoice inside as this usually means close to half the passengers in this packed-like-sardines cabin will...
Read more