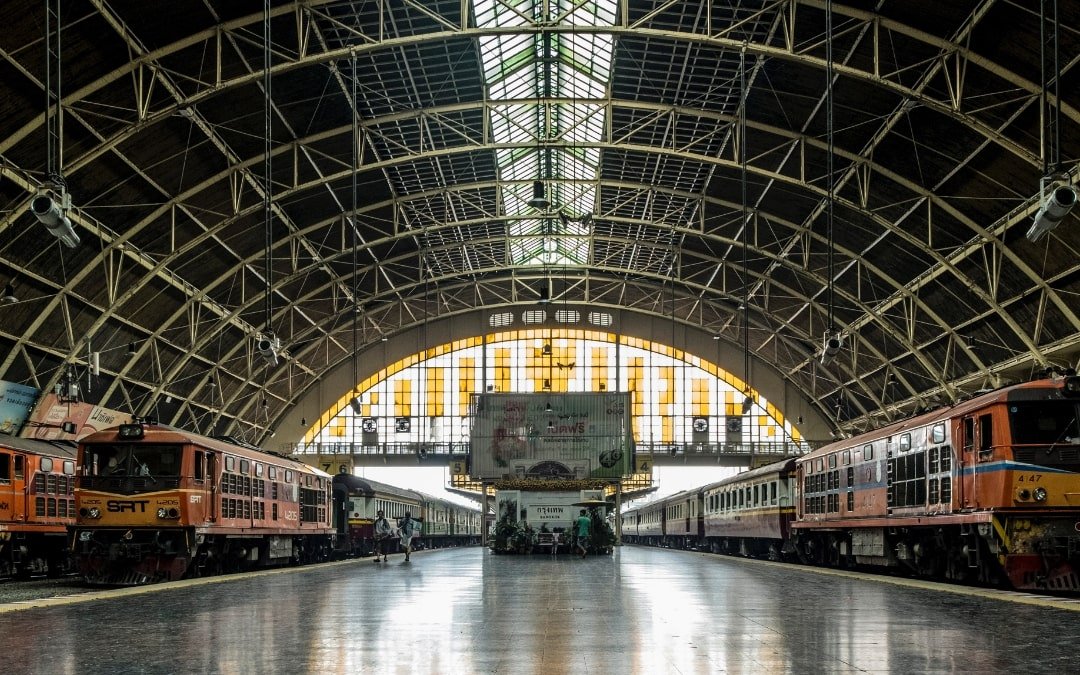 It is a truth universally acknowledged that an individual visiting Bangkok must be in want of shopping and eating. But it would be a shame to stop just there. Outside the city proper are many cultural and scenic destinations that give us a glimpse into the old soul of Thailand so often shrouded by the blinding glitz of consumerism.

And there is no more fitting way to embark on this journey of rediscovery than by train, where the journey itself is part of the destination.

This train journey is more a trip back in time. At Hua Lamphong station—surrounded by the sleek modernity of steel and glass—board a train to Ayutthaya and be prepared to be transported 800 years into the past.

Ayutthaya is a historic city that was founded in 1350; it was Thailand’s capital back when the country was known as the Siamese Kingdom. And the architecture at Ayutthaya certainly demonstrates its importance to the kingdom then.

Monumental Buddhist temples, reminiscent of Cambodia’s Angkor Wat, populate the site. Some were even built all the way back before Ayutthaya was even founded and exist today as stately ruin.

Among the temples, magnificent spires of reliquary towers—known as prang—reach out to the heavens.

Maeklong Railway Market is a popular destination for good reason. Like Taiwan’s Shifen town, a collection of stalls has sprung up around a functioning railway track on which a speeding train whizzes by at regular intervals, giving new meaning to the phrase “shop till you drop”.

But most people travel to Maeklong either by car or a chartered minibus. And we think that’s missing the point.

Instead, we recommend being on the train that speeds by the market, which will give you a whole new perspective of the already popular market.

As a bonus, the train will trundle by striking scenery, like a salt farm with huge dunes of sea salt drying in the sand, before arriving at Maeklong.

The only downside is the somewhat convoluted way to get there.

You have to wake up at an ungodly hour to catch the train from Wongwian Yai station to Maha Chai Station, and then walk to Ban Laeom station to take the train to Maeklong.

But we promise you that it’ll be worth it.

Yes, it’s a morbid name for a railway. But sugar-coating its history would be disrespectful. This railway was built by prisoners-of-war during World War II, and many perished in the process of constructing it because of the harsh working conditions—hence its name.

It’s hard to describe what travelling on the Death Railway is like. Certainly, it’s a scenic, but it’s also sobering. It affects different people differently, so we won’t try to essentialise or universalise the experience.

It’s something best experienced on your own and to reflect on the railway yourself. And it’ll definitely be a profoundly moving process.

Unfortunately, tickets for the Death Railway train are rare: there is only one trip available per day on weekends, and none at all on weekdays, so be sure to buy a ticket in advance at Hua Lamphong station.

For something a bit more light-hearted, board a train to Hua Hin. It’s a beautiful seaside town with a slower pace of life and quirky shops and eateries, perfect for a quick retreat from the buzz of Bangkok.

Exemplary of the town’s quaintness is its train station, which looks like something out of a Wes Anderson movie, what with its pastel colours and vaulting roof.

Hua Hin is only 2.5 hours away by car, but, really when the town boasts a train station that is itself a tourist attraction, why not take the train? You’ll feel as if you’re back in the golden age of train travel, and, upon alighting, be greeted by the golden sands of Hua Hin.

Getting there by train is simple, too. Just buy a ticket from Hua Lamphong station and board the train to Hua Hin from there.

Fun Places in Singapore to Discover with Your Kids

The Unforgettable Taste of Vietnam

3 Trekking Trails in Taipei for the Intrepid Traveller