10 Photos to Inspire You to Visit Kuching, Sarawak

KUCHING, SARAWAK – vast emerald-tinted rainforests, land of hornbills, foodie central of Borneo, and emerging destination of choice for globe trotters and food hunters alike. In particular, Kuching city is fast becoming a fave among travellers around the world.

Kuching is home to a mixture of various cultural backgrounds and traditions melding into one big, happy family. It is a city that has a unique and rich history behind it. On top of that, Kuching is also home to some of the most exotic flora and fauna in the world.

For urban shutterbugs, its streets are filled with old-timey colonial architecture that’ll surely light up your Instagram feed. But most importantly, Kuching is also the birthplace of some of Malaysia’s most well-known heritage dishes.

Interestingly, Singaporeans – who are known to take short trips across the border to Malaysia and more particularly, to Kuala Lumpur or Johor Bahru – are beginning to take note of this underrated travel destination. In fact, Kuching is now one of the top 10 emerging destinations for 2019 for Singaporeans.

Still not convinced? Take a gander at these 10 photos and be prepared to be captivated and inspired to visit Kuching today!

Kuching City From Above

Make no mistake about it, Kuching is still very much a developing city – though it is getting there. From rows of traditional Chinese shops in Carpenter Street to the ultra-modern look of the Dewan Undangan Negeri (DUN) building, there’s something for everyone.

Stroll along the Kuching Waterfront in the evening and you’ll find tourists and locals alike enjoying the soft breeze of the city. Take a moment and admire the night view of the Astana and the DUN. If you’re there at the right time, you can even witness the Darul Hana musical fountain in action.

Better yet, take a closer look at the magnificent State Assembly Building by crossing the Sarawak River via the winding Darul Hana Bridge. Alternatively, you could even take a sampan (small wooden boat) to cross the spanning river for a more authentic experience.

Speaking of boats, the chance to partake in a sunset cruise along the Sarawak River is not to be missed. The 90-minute trip takes passengers along the river to catch the sunset (if weather permits) and this is undoubtedly the best way to experience this city.

Local tip: Try to choose a weeknight and get to the pier early so you have a greater chance of getting a top deck position.

Here’s a quick history lesson for you: Sarawak used to belong to the Sultan of Brunei around the early 19th century. Then came James Brook, who aided the Sultan in curbing regional rebellions and piracy by providing military support. The Sultan gifted the land that is known as Sarawak today to Brook for his efforts. James Brook then became the de facto ruler and thus, the First White Rajah’s reign began.

Today, Kuching continues to exude the Brook Dynasty’s legacy in the form of its architecture. For example, Kuching’s Astana – the former residence of the ruling Rajahs – is a highlight. Other colonial architectures from the Brook era include Fort Margherita, the Old Court House, the Round Tower, and the General Post Office. Experience the history of Kuching through the city’s contrasting architectural styles.

Cat lovers will definitely be elated to visit this “city of cats”. After all, Kuching (Kucing) is the literal translation for the word “cat” in Bahasa Malaysia.

And its cat culture is evident once you’ve taken a closer look in the city. You’ll find numerous cat statues, motifs, and art littered all over the streets. Moreover, Kuching is also home to one of the only Cat Museums in the region – located a mere 20 minutes drive from Kuching Waterfront.

Kuching’s Cat Museum has one of the largest collections of cat-themed artefacts in the world. Some artefacts from this collection include a mummified cat from ancient Egypt, a gallery of feline-related advertising, and the five species of wild cats found in Borneo.

But if you’re not big on cats, the short trip out of the city is still well worth your time for the sole reason of sightseeing. After you’ve had your fill (or not) of the feline exhibits, you may spend time admiring the picturesque and panoramic view of the entire city.

Get Up Close & Personal with Sarawak’s Iconic Wildlife

The tropical rainforests of Sarawak are home to the endangered Bornean orangutans. Unfortunately, these adorable and gentle creatures are on the verge of extinction due to deforestation and the destruction of their habitats.

Semenggoh Nature Reserve adopts primates that have been orphaned or rescued from captivity. The centre specializes in teaching these apes how to survive. The apes are then released back into the wild once they are capable of fending for themselves.

The feeding times of the orangutans are between 9.00 am to 10.00 am and 3.00 pm to 4.00 pm daily. Do plan your schedule around these times if you want to catch a glimpse of these elusive creatures.

Another rare and endangered primate, the proboscis monkey is most often found in Bako National Park. These primates are known for their signature long nose and their red pot-bellies. If you’re lucky, you might catch a glimpse of these exceedingly scarce creatures. Other than that, there are also Borneon bearded pigs strolling about outside of enclosures in the park.

To get to Bako National Park, you’ll first need to travel to Bako village which is located more than 20km from the city. From there, you can then take a boat to reach the park.

Being known as the Land of the Hornbills, Sarawak is home to eight out of the 54 known species of hornbills in the world. Most hornbills in the State can be found in protected areas and national reserves.

This particular photo shows the majestic Rhinoceros Hornbill, the most well-known out of all the hornbill species. The Rhinoceros Hornbill represents an important cultural symbol for the people of Sarawak, and especially the Dayak community.

For Sarawakians, it represents Sarawak’s State emblem and is also known as the State Bird of Sarawak. For the Dayaks, Burung Kenyalang – as it is known locally – signifies the spirit of God and must be treated with respect.

And here we are at the main course (pun intended).

If you’re thinking of going on a food adventure in Malaysia besides Penang and Ipoh – Kuching does offer variety, taste, and affordability.

You know Sarawak Laksa is legit when even celebrity chef Anthony Bourdain (RIP, friend) previously described it as “Breakfast of the Gods”.

Other than Sarawak Laksa, you also have the classic Kuching breakfast food – Kolo Mee. The springy noodles, topped with juicy Char Siew and minced pork, is Kuching’s signature dish.

If you’re looking to add a little more oomph, then it’s recommended to add a dash of red (Char Siew) sauce to your bowl of noodles. The scarlet red noodles may look inedible at first, but once you’ve sampled it, we promise you won’t be able to stop.

Otherwise, if you have a sweet tooth, then the ever-popular Sarawak Layer Cake (Kek Lapis) is a staple for tea time. The colourful delicacy remains a top pick among tourists visiting Kuching – with some of them even bringing boxes full of the rainbow-coloured confectionery home. 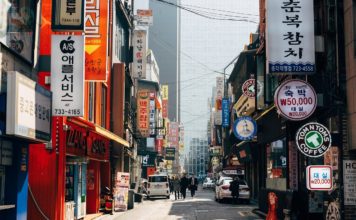