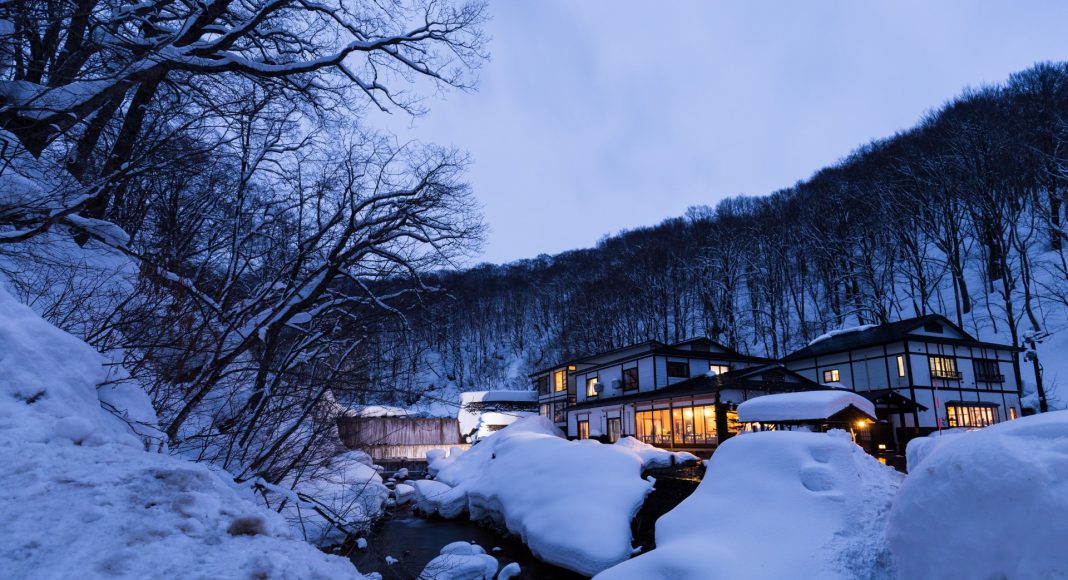 Winter is truly an underrated season to be in Japan with light illuminations that are widely regarded as some of the best in the world. While Christmas isn’t the big tradition it is over in the Western hemisphere, celebrations can still get pretty wild, and if you give yourself the opportunity, Christmas in the big cities of Tokyo, Osaka, and even Kyoto will surprise you.

If you’re looking for a more heart-warming and cosier Christmas however, the historic onsen town of Kinosaki will absolutely make you fall in love with Japanese culture, and winters in Japan.

It’s a beautiful scene straight out of a painting with Japanese residents dressed in traditional yukata traipsing through the willow-lined river and streets of Kinosaki. You can hear the clip-clopping of the wooden geta (traditional Japanese footwear) from your ryokan (traditional Japanese inn), albeit muffled by a layer of snow that has since coated the streets as Japan approaches the heart of winter.

Old-fashioned as they come, Kinosaki’s undeniable charm draws from its simplicity and its rustic atmosphere exuded by the willow trees and traditional architecture that frame the streets. When snow starts to fall, Kinosaki becomes a winter wonderland like no other.

It’s ease of accessibility from Osaka, Kyoto, and Tokyo by way of the Japan Rail trains (approx. two hours) makes the town that much more attractive for people to take a short trip to experience all that this onsen town has to offer.

A recommendation for Kinosaki during Christmas just writes itself, for when the temperatures drop near zero, there’s nothing more comforting than the sight of low-rise traditional houses peek out among steaming onsens.

Make no mistake, Kinosaki has an enduring charm that has stretched for over a millennia, but it has made its name on the back of its public hot springs that have enraptured people for well over 1,000 years. Kinosaki’s original hot springs were founded in the 8th century, and today there are seven public onsens that form the foundation of Kinosaki’s inbound draw.

If you stay at any one of the traditional local ryokans, then you’ll have access to any and all of the public baths for free. If you’re only taking a day trip there and staying overnight isn’t in the equation, you can purchase a one-day pass for the onsens at 1300 Yen. For a truly immersive and comprehensive experience however, we’d recommend staying a night or two – you won’t regret it. Your ryokan of choice would provide you with yukatas, and during the colder months, extra layers will be given so you won’t freeze to death while looking all beautiful and smashing in your traditional Japanese garb.

Now, onsens in Japan typically bar anyone who has tattoos from entering, but the public ones in Kinosaki have no such rule, so have no fear if that was within your consideration. Some inns and hotels have their own private onsens but it’s highly recommended to visit the seven iconic ones for the full experience.

Each of the seven onsens are unique and purport to give you different effects and healing properties which has given rise to a phenomenon called sotoyu meguri, or onsen hopping. This hopping around the various onsens is as much part of the culture today as donning on the yukatas and walking the streets.

You can start at Satono-yu, the largest bathhouse in Kinosaki and the closest to Kinosaki Onsen station. Many perceive this onsen to be the best for first-timers as it offers a wide range of baths from hot to cold, and even jacuzzis, allowing you to try all the different types. Aside from the baths, there are saunas available as well including a rather different ice-cold “penguin sauna”. If you’re looking for a place which has a large variety, look no further than Satono-yu.

Goshono-yu is the newest kid on the block, and also the grandest of the seven. The belief runs that a soak at this bathhouse will help you find a future spouse as well as prevent fires. Talk about powerful.

Built to take after Kyoto’s Gosho Palace, Goshono-yu presents a luxurious imperial-style façade with an equally grand interior. Soaking in the outdoor baths within the grounds comes highly recommended, and it’s easy to see why when your view are lush gardens with a gurgling waterfall.

If you would like a little more peace and quiet, Kouno-yu is one of the two onsens that is situated slightly further away, necessitating a longer walk to access. The very first bathhouse established in Kinosaki, the legend goes that stocks used to bathe in the marsh waters there for their healing properties. The myth has taken a little life of its own and the waters at Kouno-yu today are said to bless marriages and provide longevity.

Kinosaki at any time of the year, is famous for their hot springs, though it does see more people during the colder parts of the year naturally. But winter Kinosaki is famous for another thing, Matsuba crabs.

Caught at the nearby Tsuiyama Port, these snow crabs are a local delicacy and signature winter dish of Kanosaki. From grilling to shabu-shabu, and even as sashimi, Matsuba crabs are arguably the other reason people flock to Kanosaki during wintertime. Boasting flesh that is sweet and succulent, it’s a necessary inclusion to any Christmas meal in Kanosaki.

Another must-try local delicacy is the Tajima beef, a true melt-in-your-mouth cut of beef that is every bit divine as the top tier cuts around. Many know of the world-famous Kobe beef, but many are unaware that the origins of Kobe beef come from the Tajima beef cattle. Only a certain group of cattle are chosen among the Tajima beef cattle to be considered “Kobe beef”. Whether you have Tajima beef sukiyaki style or as a steak, get ready to be blown away by its buttery texture and unbelievable taste.

Kinosaki is a quaint and beautiful town, one that is relatively hidden away from the bustle that comes along with spending time in the big cities. Time feels more in your control, and the vibes are soothing. Japan has a lot of offerings for a good Christmas holiday and I can’t blame you for wanting to revel in the big festivities in Tokyo or Osaka. But if a relaxing and cosy Christmas is what you need, Kinosaki may very well be the place for you. To be very honest, with good food and onsen for days, I don’t know what else anyone needs to be convinced to spend Christmas in the cosy town of Kinosaki.

Top photo by Michael Sum on Unsplash, for illustration purposes only.

As the distant sun sets, the rays illuminate the running waters of Horsetail Falls within Yosemite National Park, and the backlit of the sun...
Read more