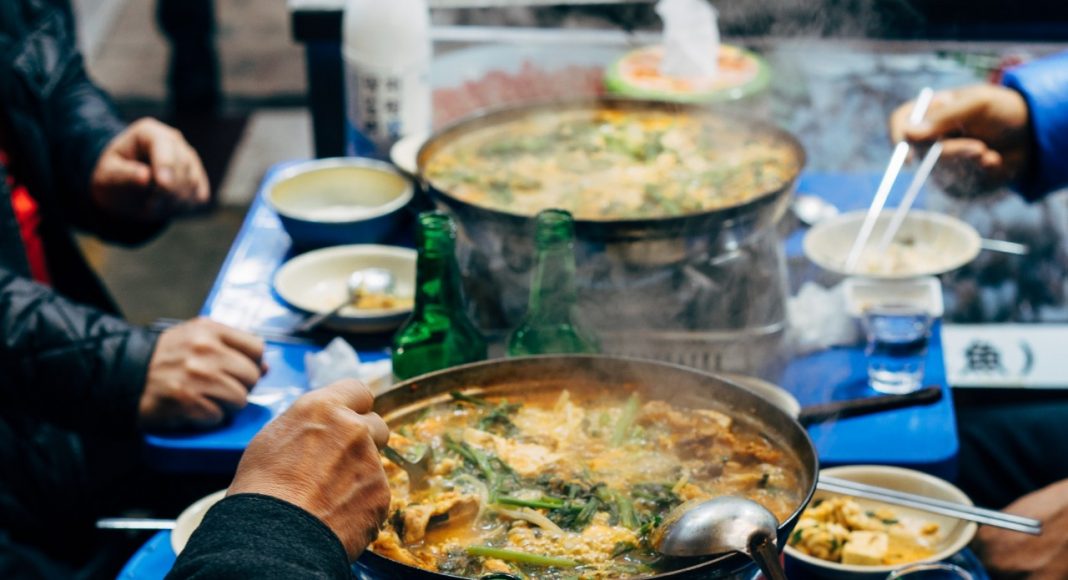 10 Korean Dishes to Keep You Warm During Winter

If you’d be so blessed to have the opportunity to travel to South Korea during the winter festive season, you definitely have to layer up with all the Uniqlo Heat Tech you can wear. Winters in South Korea are known to be rather harsh, with temperatures going sub-zero in some parts of the country. I still remember (regretfully) huddling up in my hotel room while the beautiful streets were covered in snow, but my god was it freezing.

But then, you didn’t fly six to seven hours to South Korea just to hide in your hotel, freezing temperatures be damned. But out in the fashionable streets of Dongdaemun, truth be told, there’s only so much one can do to keep the cold away. Arguably the more effective way of battling the cold dastardly winter is warming you inside through your tummy. Maybe that’s why it’s called Seoul food. Okay, I promise that was my first and last pun. Maybe.

Every article or listicle on Korean food has to begin with street food, it’s their genesis and certainly the core of the food experience in Korea. From twister fried potato to mandu (steam or fried dumplings), and even kimchi, Korean street food is endearing to all, and probably one of the main reasons which makes South Korea such an attractive destination.

Really only available during winter, Hotteok is a stuffed pancake that everyone craves for come year end. You don’t have to walk too far down any food street before passing a stall that offers this sweet doughy dessert, a perfect accompaniment to walking in the freezing cold. Pan-fried on a griddle and stuffed with brown sugar, cinnamon, honey, and sunflower seeds, Hotteok needs a ‘highly addictive’ warning. Actually, now just thinking about it, all Korean street snacks should come with that warning.

Some places have even swapped out the brown sugar syrup for Nutella and yes, it is as heavenly as it sounds. Here’s an exclusive Discoverist tip: if you’re debating if you should get more than one, the answer is yes, it’s always yes, because you will.

A classic street food that is ubiquitous across South Korea and increasingly exported overseas, Tteokbokki with its savoury spicy sauce, is a particularly apt one to fight the winter cold. Made from rice cakes, Tteokbokki is all sorts of hot and chewy, and slathered with a spicy sauce, you cannot go wrong with it during winter.

Bungeoppang is one of my personal favourite Korean street snacks as I’m a sucker for red bean. A goldfish-shaped pastry encasing a sweet red bean paste, Bungeoppang is the cuter Korean version of our local min jiang kueh (pancake) and the cousin of the Japanese Taiyaki.

Now, I’ve never had Gyeran Bbang (egg bread) before but it sounds like an absolute winner if you ask me.  A sort of modified version of a French Toast, Gyeran Bbang is a steamed bread with an entire egg in the middle. It usually comes with an assortment of toppings from diced ham to cheese, and even seeds, it’s a filling snack that will keep you warm and full.

Done well, I’d imagine you get a fluffy pastry with a savoury and slightly creamy bite as the egg yolk coats every mouthful.

Odeng is just one of those food that seems to be tailor-made to warm the soul. A traditional Korean fishcake usually skewered and served with a light but flavourful broth, there’s something very comforting about odeng especially when the temperatures dip during winter.

A bite of that soft fishcake and sip some of the broth and you’ll involuntarily find yourself sighing in satisfaction.

As one of the major rice-consuming cultures, it’s not surprising to see porridge appearing on the list. Like its peers, Korean juk is a comforting bowl of rice porridge that is usually had when you feel under the weather.

Korea has ssaljuk, which is plain rice porridge and often served with an accompaniment of banchan (side dishes) to bring some flavour to the meal, but there’s also a smattering of varieties which separates them from the rice-based porridge we are so used to here in Singapore. Two of the more popular ones you’ll see are hobak-juk (pumpkin porridge) and patjuk (red bean porridge), with the latter being especially popular on Dongjinal (Winter Solstice) with the myth that it chases away the bad spirits who have a huge distaste for red bean.

A jiggae (stew) might actually be the best way to combat the cold, and sundubu jiggae (spicy tofu stew) is one of the best types out there to have. A rather spicy stew, one spoonful of soup is enough to immediately warm your entire body.

Typically featuring chunks of meat along with vegetables and of course tofu, a pot of this spicy stew will be sure to feed two to three, or maybe even four of you. A spoonful of hot and spicy soup with tofu is undoubtedly one of the best ways to combat the Korean winter.

Whether you have sundubu or kimchi jiggae, you’ll exit the restaurant feeling like the cold has nothing on you.

There’s kimchi, then there’s winter kimchi. Yes, I did a double take as well when I found out about it. The cabbage used isn’t really any different from your typical kimchi, and the dish is still fermented. The difference lies in the process of preparation and preservation called gimjang, which has been listed as a UNESCO Intangible Cultural Heritage.

Using pogi kimchi, gimjang begins sometime around mid-October and lasts till about late November, a long-standing tradition that sees large numbers of Koreans coming together to prepare large quantities of kimchi for the harsh and bitter winter that is to come. Though modern technology and advancements have somewhat made the practice redundant as you’ll be able to get fresh produce despite the winter conditions, gimjang these days lives on as a popular family and societal tradition.

Now, I realise I’m bordering on blasphemy (or have already crossed it in the mind of many Koreans) by listing samgyetang, or ginseng chicken soup here. For the uninitiated, in Korean culture, samgyetang is solely reserved for the summer, for the hottest days of the year. This concept of having a hot bowl of chicken soup during the summer births from the idea of iyeolchiyeol which means “fight heat with heat”, with notions of revitalisation mixed in.

But hear me out, does a heart-warming bowl of hot ginseng chicken soup not sound absolutely fantastic during the frigid winters of Korea? Tender chicken with herbs like ginseng, garlic cloves, and jujubes inside, it’s right up there with the best of them when it comes to cold-weather comfort food. Plus, a shot of ginseng liquor on the side, amirite?

It’s a classic Korean summer tradition, but it can also be a must-have during winter.

There was no way I was going to finish the article any other way. Quite possibly the greatest Korean culinary invention of all time (in my not so humble opinion), Korean Barbecue is one of the heartiest yet comforting food to have come winter. It’s already amazing as it is, and when you tack on the cold winter, you’ve got one of the best, if not the best combination.

The sight and the sizzling sound of Hanwoo beef (Korean beef) or Samgyeopsal (pork belly) is enough to make anyone drool, and just the heat of the charcoal provides a much-needed reprieve from the bitter cold. You shouldn’t need a special time or occasion to have Korean barbecue, but if you need to “find” an excuse to have it, the frigid winter is here for you.

Christopher Lee
Previous articleA Cosy Christmas in Kinosaki Onsen Town
Next articleWhere to Eat in Chinatown, Singapore? 10 Choices from the Traditional to the Unexpected

One of the most important things to take note when travelling is how to get around the city or country of your choice. Your...
Read more
See & Do

I didn’t quite get it at first. What was all the hype about New York City (NYC)? Spending most of my time in a...
Read more
Eat & Drink

“It’s healthier, it saves the environment, it helps to protect the animals!” Vegan food in Singapore is gaining in popularity in recent years. Ask any...
Read more