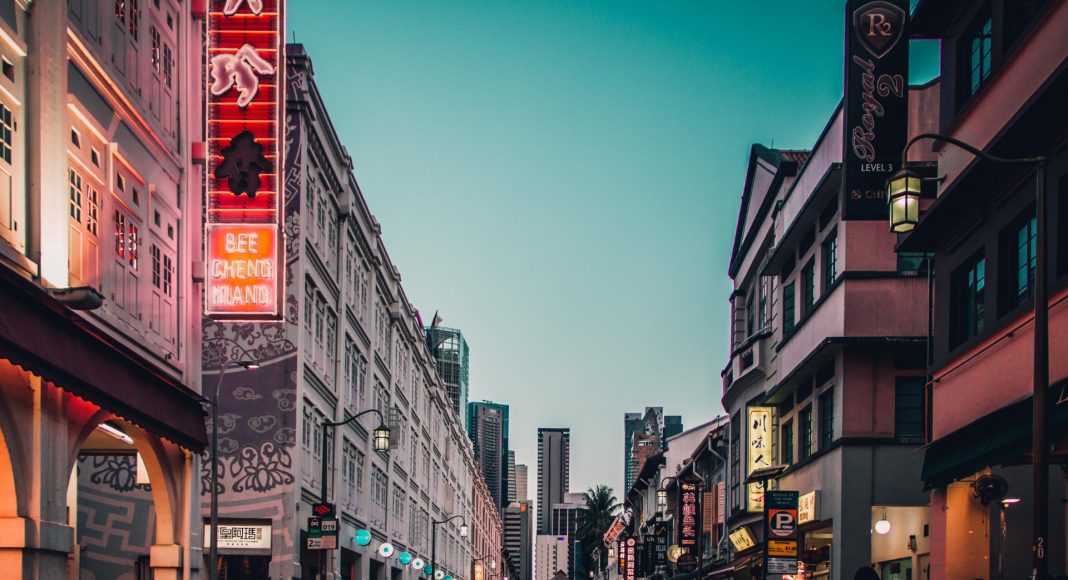 Where to Eat in Chinatown, Singapore? 10 Choices from the Traditional to the Unexpected

Chinatown is among Singapore’s most preserved historic district, with the highest concentration of preserved heritage buildings in Singapore. The preservation of history and legacy, however, goes far beyond the keeping and retaining the old historic facades of yesteryear.

What makes Chinatown such an eclectic place is surely the food, and there’s truly no better way to explore Singapore’s local Chinese culture than through the belly. If you’re talking about some of the best concentration of Chinese food in Singapore, it’s got to be Chinatown.

But the Chinatown today is home to more than just a bevy of good Chinese food, with the foodscape becoming increasingly diverse with out-of-left-field options like Spanish and Australian barbecue.

So, without further ado, here’s our take on some of the best places to eat in Chinatown.

Where else to start a food guide of Chinatown than Chinatown Complex Market and Food Centre. Originally built in 1981, it’s the largest food market in Singapore, comprising some 226 cooked food stalls. In the past, it was built to accommodate the many street hawkers who were piling their trade illegally.

Today, it’s more famously known as the home for Liao Fan Hong Kong Soya Sauce Chicken Rice and Noodle, or better known as Hawker Chan. Routinely getting press as the cheapest Michelin Star meal in the entire world, long snaking queues are to be expected right from when they open so be prepared bring your A game.

Focus too much on the star-studded stall however, and you’ll miss out on many other noteworthy stalls that share the same building. Hong Kong Mong Kok Tim Sum and Chang Ji Gourmet are two that have cultivated a loyal following over the years and should not be missed out. The former serves up restaurant quality tim sum at a fraction of the price while the latter fries up some of the best bee hoon you can ask for in a breakfast.

The second most popular food market behind the Chinatown Complex, People’s Park Food Centre offers their own historic selection of stalls from Toh Kee Roast Duck to Loh Mei Specialist. Both are historic places with the former roasting duck for nearly a century since the 1920s, while the latter serves up a close-to-extinct unique gravy, almost stew-like alongside a bowl of white rice or yellow egg noodles.

There’s also a comforting bowl of Yong Tau Foo from Bai Nian or tingle your taste buds at Ri Ri Hong Ma La Xiang Guo, which for many is a staple and a necessary ritual when visiting People’s Park Complex Food Centre.

When it comes to food markets in and around Chinatown, Hong Lim Market would probably be the least known, living in the shadows of both the Chinatown and People’s Park Complexes. And well, truth be told, people who frequent Hong Lim would also probably wish it stayed that way.

Hidden within Hong Lim Market and Food Centre are a couple of Michelin Bib Gourmand stalls that have been toiling for some decades now. One of the most recognisable stalls would be High Street Tai Wah Pork Noodle, and no, this isn’t the other one star Michelin hawker that Singapore touts aside from Hawker Chan.

If you’re confused, and most people are, the Bak Chor Mee you find in Hong Lim Market is run by the brother of the Hill Street Tai Hwa Pork Noodle (this is the one with the Michellin Star). The Hill Street Tai Hwa stall can be rather divisive, with its generous use of vinegar, but that seems to be a slightly toned down version at Tai Wah in Hong Lim Market, leading to some preferring the relatively lesser known stall.

If the queue at Tai Wah is too long, Famous Sungei Road Trishaw Laksa and Outram Park Fried Kway Teow are two other Michelin Bib Gourmand awardees to go for, but then again expect sizeable queues.

Despite their new and furbished storefront in Chinatown Point, Haikee Brothers have had a long-standing history in Chinatown. While they are currently being run by Third Generation siblings James and Joseph Wang, who have taken over the business from their grandfather, the original Haikee stall had been in business since the 1950s.

It is said that the Wang brothers prepare the soya sauce chicken word-for-word according to the tightly guarded family recipe that has been passed down. The daily queues are a testament to the soft and tender chicken, and while you rightly should get their soya sauce chicken rice or noodles, consider adding on a plate of their tender, caramelised char siew – a delight in its own right.

Famously known for their diamond-shaped egg tarts, Tong Heng Delicacies is somewhat of an institution in Chinatown. Setting up shop in 1935, Tong Heng has been baking egg tarts for some 84 years now, cementing themselves as one of the household names in the egg tart world in Singapore.

To this day, their egg tarts are handmade, and you’ll be pleased to find a smooth egg custard encased in an almost hybrid crumbly cookie tart and flaky shortcrust. Although you can find many other Cantonese baked goods in the store today, they have made their name on the backs of those delicious flaky egg tarts and will continue to do so.

Yum Cha is set in the heart of Chinatown, and it’s one of the few places in Singapore where you still get your dim sum from various push carts, much like the traditional ones in Hong Kong.

I’m hesitant to equate the atmosphere of Yum Cha to the ones you feel in Hong Kong because it will truly never be the same, but I must say it’s quite close as you can get to the restaurants in Hong Kong especially during the weekends. The sound of the push carts rolling across the restaurant, the chitter chatter in the background punctuated with the clanging of porcelain teacups, boisterous indeed.

Much has been raved about their signature salted egg yolk custard buns that oozes out a viscous, savoury sweet filling, but I would highly recommend getting a bowl of their century egg pork porridge which remains to this day one of the most comforting bowls of porridge I’ve had in a dim sum restaurant.

Our only dessert eatery on the list, Mei Heong Yuen is one of those places that is deemed a “must-try” in many guide books on Chinatown. Presented as one of Singapore Chinatown Heritage Brands, this humble dessert store offers up all your classic Chinese desserts from almond and sesame pastes to herbal jellies, and tang yuan (glutinous rice balls).

What you’ll notice however, is an abundance of shaved ice desserts called “snow ice”. There are some 20 flavours for you to choose from and these flavourings are already worked into the shaved ice itself, instead of a syrup drizzle you often see in ice kachang. The result is a sweet, almost creamy texture, just think of it as a cheaper Bingsu.

Tong Ah Eating House used to be housed in the iconic red and white shophouse in the middle of Keong Saik Road, which explains the Chinese characters engraved onto the front of the historic building. It has now moved to a more traditional kopitiam unit to the left – you’ll wanna look out for a deep blue signboard.

While many have written about Tong Ah’s traditional breakfast set, I found it to be rather mediocre at best, and the coffee or tea wasn’t anything amazing to write home about. But come back at lunch, or dinner, as Tong Ah Eating House offers some of the best tze char you can find in Singapore. The assam fish head is a specialty of theirs, featuring a fresh head doused in a gravy which is all parts aromatic and tangy. Also, never leave the table without before ordering a plate of their coffee pork ribs, that is a must.

Sure, it doesn’t get as much fanfare as the more popular counterpart Kok Sen Restaurant just across the street, but it offers up comparably good dishes with less crowd.

Just because we’re in Chinatown doesn’t mean we have to stick to Chinese food. Burnt Ends is a one Michelin star Australian-style barbecue restaurant that requires ridiculous reservations of months in advance to secure yourself a table (or more accurately, counter seats).

Housed in a little small shop house along Teck Lim Road, you wouldn’t think of this place as an entrant on the Asia’s 50 Best Restaurants list. Featuring an open kitchen concept, you’ll find yourself sitting at the counter facing the chefs seriously crafting elegant plates of food that will make you drool even before the aroma wafts through the air.

Don’t miss out on their Sanger Burger. Yes, I know it seems crazy to be put on a month long wait or longer just for a burger, but don’t miss it.

There’s perhaps no more fitting way to end off a Chinatown food guide than with a Spanish restaurant. I jest but make no mistake, Esquina doesn’t joke around with its Spanish tapas.

Since opening back in 2011, Esquina has quietly developed a reputation as being one of the best Spanish tapas restaurants operating here in Singapore. Helming Esquina is current head chef Carlos Montobbio, who has trained under Michelin starred chefs and Michelin starred restaurants around the world.

7 Basque Burnt Cheesecakes In Singapore Worth Every Sinful Calorie

There’s still plenty of time left before 2020 comes to an end, but Basque burnt cheesecake has solidly vaulted to the top of Dessert...
Read more
Eat & Drink

When it comes to Japanese whisky, there’s one brand that has climbed to the pinnacle, and you’ve probably guessed it – Suntory.While many whisky...
Read more
Lifestyle

Missing Tokyo’s RedRock? Here’s How to Make Your Own Beef Steak Bowl At Home

Meat lovers, this is the best 30 minutes you'll spend in the kitchen.We are living in unprecedented times and looks like it will be...
Read more