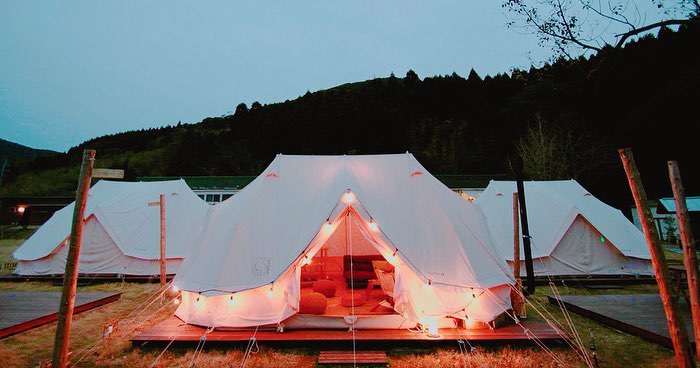 Majority of us will resonate with this: “You can take the girl out of the city, but you can’t take the city out of the girl.” So, you want to experience the great outdoors, but without the hassle of traditional camping? Or should we say be completely at the mercy of Mother Nature?

Then you got to go Glamping, a portmanteau of glamour and camping, which will give you the best of both worlds. Gone are the days of roughing it out in the wild, there are plenty of unique and stylish experiences in the wilderness without compromising your modern comforts.

Embracing the art of Hygge

Japan, a nation blessed with an abundance of natural wonders, has a thriving glamping culture. The Japanese are also embracing the art of Hygge (pronounced as hue-ugh), which is a Danish lifestyle concept that has inspired a global trend of cosiness, comfort and well-being.

Located off the western coast of Kyushu, Goto Islands (literally means Five Islands) are famous for their scenic landscapes, featuring white beaches with crystal clear waters, mountains, quaint fishing villages and historic churches. Though lesser known than Okinawa, Goto Islands have been an idyllic hideaway for the locals. There are over hundreds of islets formed alongside the five main islands – Fukue, Hisaka, Naru, Wakamatsu, and Nakadori.

Nordisk Village is located in Fukue. Why is it Scandinavian style? You might ask. Well, did you know that Japanese aesthetics have influenced the Scandinavian designers and vice versa since the late nineteenth century up to the present? Both Japan and the Nordic countries share similar design principle – simplicity, use of natural materials and quality craftsmanship.

Thus it became apparent for Fujita Kanko, a leading hospitality company in Japan, and Nordisk, a Danish manufacturer of outdoor equipment to collaborate and established Asia’s first Scandi-style glamping site.

With the idyllic natural landscape as its backdrop, Nordisk Village beautifully combines all the elements of relaxation, activity and luxury. Plus, the tents have WiFi! Nordisk Village has successfully eradicated the uncomfortable thoughts of camping like unhygienic campgrounds, cramped tents and lack of facilities.

Getting there: The main island can be accessed by a 40-minute flight from Fukuoka or a ferry ride from Nagasaki port.

AirAsia Group currently operates an exclusive Airbus fleet flying out of its hubs in Malaysia, Thailand, Indonesia, the Philippines, India, and Japan. With its...
Read more
Tips & Trends

Sweep your beloved off their feet and take them to Casa di Giulietta (also known as Juliet's house), the site which inspired Shakespeare’s play...
Read more
Lifestyle

Asian Paradise: Where to Spend Valentine’s Day with Bae

They say every day should be Valentine’s Day. While we agree with that, 14 February should still be a day reserved for a spectacle. Asia...
Read more