“It’s healthier, it saves the environment, it helps to protect the animals!”

Vegan food in Singapore is gaining in popularity in recent years. Ask any vegan and you’ll be told that the vegan diet is higher in fibre as well as lower in cholesterol, promising health benefits such as a lower risk of heart disease.

On top of that, vegan and vegetarian restaurants have been going out of their way in recent years to debunk the myth that the food they serve is bland, and we must say, there are some establishments that are pretty on point.

Annnnnnd, I’m not part of them. Don’t get me wrong, I understand their argument, and I acknowledge the health benefits, but I just can’t give up my meats.

But if you are vegan, or if you are thinking of giving vegan food a try, here are our recommendations on where to find vegan food in Singapore.

We hope you had a jolly good time 🥰 over the 🎄 Christmas period ☃️. Now, it's time to gear up and celebrate 🎆 New Year's Eve with us. 🍻 Give one of our crowd-pleasing favourites – 🍕 FOMO Pizza 🍕 – a try!⁣ ⁣ #veganpizza #FOMO⁣ #NYE #celebration⁣ #singapore #clarkequay

Fast food has the reputation of being supremely unhealthy, but NomVnom is stepping up to the challenge of turning fast food into a respectable, even healthy choice.

Since opening in 2015, NomVnom has made their name in the vegan community on the back of their delicious burgers which can be fully customisable (during off-peak hours).

While their burgers are rightfully grabbing headlines, NomVnom at Clarke Quay has introduced pizzas on their menu that have been receiving rave reviews. One standout is FOMO which has a medley of broccoli, tomatoes, monkey head mushrooms, cashew cream cheese, soya cream, and herbs.

If the Garden of Eden looks like something, we would imagine this is how all the beautiful plants, fruits and leaves would look like to paint a picture of edible joy! We are RE-imagining how a plant based lifestyle would look like from a heart of compassion, vibrance and purity. This is a snippet of what our team came up with and unveiling the full menu in the weeks to come! Creating a perfect storm in the kitchen and updating our entire menu! New menu coming soon 🌱🌱♥️♥️ Quinoa Falafels Epic Salad with Dill and creamy avocado . A rich umami seaweed tofu salad with pure extra virgin olive oil and dash of red wine vinegar . Summer Dragonfruit Pomelo Garden Salad with fresh mint We hope to inspire life (as no animals were harmed in the process) and bring back the joy of communing with food with these new creations 🤩

Afterglow by ANGLOW “aim[s] to bring the sexy back to vegetables.” Now, I don’t know what that means exactly, but man who says vegan food can’t be exciting.

Working with local and regional farmers, Afterglow is setting out to change the perception that vegan food in Singapore is all boring and bitter foods, crafting some ingenious creations that play with flavour, texture, and looks.

Pictured is their Israeli Autumn Salad which takes the full bold flavours from the Middle East and turn them into a salad bowl featuring their house-made falafel (comprised of quinoa, chickpeas, coriander, parsley, brown rice flour) and seasonal vegetables. The colours in the inviting dish certainly pop, and the combination of ingredients sounds quite delicious – especially if nicely spiced.

Afterglow often conducts community sharing sessions and workshops as well if you’re interested to learn more about veganism and eating healthy in general.

A picture is worth a thousand words not spoken, because we're too busy munching on the #TrufflebelloBurg! 😉⁠ ⁠ Just looking at this picture makes us hungry!⁠ ⁠ 📷: @sandyland.eats⁠ ⁠ #burgerlife

Well, thanks to VeganBurg, aspiring vegans needn’t give up their love of burgers.

Building quite a reputation for themselves in the vegan world, VeganBurg offers some of the best mock meat burgers you’ll find in Singapore. Established back in 2010, you’d have to be doing something right to survive the intense culinary industry in Singapore for a decade.

I know it’s wild to think that comfort food like burgers can be plant-based, but despite not being meat burgers, the soy-based patties are said to be juicy and flavoursome. From their Char-grilled Satay Burger to Hawaiian Teriyaki, and their signature Creamy Shrooms, VeganBurg has cemented their place in the hearts of vegans in Singapore.

To be honest, it has even got me wanting to give it a shot.

Three Buns, another popular burger joint, while not a vegan place, has a plant-based burger as well, and if it’s anything like their other selections, it should be another fabulous option.

Monkey Head mushrooms with oats! This dish was very interesting, I liked the crispy oats coupled with my favourite mushroom. But the it's a had sugar in them so it almost felt like I was eating morning cereals ahahah, cognitive dissonance . . . Overall, I liked this dish but I would not ordered it again as I liked the other mains more #mushroom #monekyhead #monkeyheadmushroom #oats #peranakan #peranakancuisine #peranakanfood #veganperanakanfood #vegan #veganfood #veganfoodie #plantbased #plantbasedfood #plantbasedfoodie #vegansingapore #Singapore #singaporevegan #vegansg #veganig #veganinsta #veganinstagram

Whole Earth is an institution in the vegan and vegetarian scene, winning multiple awards over the years, including a Michelin Bib Gourmand which they have maintained for four years straight (2016-2019).

Since first opening in 2003, Whole Earth has positioned themselves as a “vegetarian place for non-vegetarians”, a bold claim considering the dismissive attitude many non-vegetarians have for vegetarian or vegan food in Singapore.

With that said, cursory research on Whole Earth had me uncovering heaps of rave reviews on the longstanding restaurant, which utilities Thai and Peranakan cooking. Dishes to try are their signature Olive Rice and the Penang Rendang, which I’ve heard people saying is better than some rendangs they’ve had elsewhere.

While food prices are rather steep here, their quality is evidenced by their returning customers, vegetarians and non-vegetarians alike.

Vegan diet or not, ice cream is a universal love that no one can deny. And now, Smoocht is telling you that it doesn’t necessarily have to be a naughty treat.

Hailing themselves as Singapore’s most iconic vegan ice cream (truth be told, I don’t know of any other), Smoocht believes in enjoying food without the enjoyment being at the expense of our bodies, our environment, and animals.

Specialising in handcrafted artisanal ice creams that are uniquely made from organic crystal brown rice, organic evaporated sugar cane juice, real fruit and/or pure nut butters, you’ll be comforted to find familiar flavours like Chocolate French Kiss and Sunny Strawberry Fields to Lemonini and The Perfect Matcha, and the occasional oddball like Xiao Hei (Little Black) which I can only presume (or hope) to be black sesame.

Boasting only to have a third of the calories usually found in regular ice cream, this is one way to have dessert guilt-free!

I remember being mind-blown when I first saw Yakun's kopi-o (black coffee) and kaya (pandan spread) as flavours for Glico's Pocky. I guess up...
Read more
Eat & Drink

Food fads can be fun for sure, they bring an added component which tends to make the original dish more eye-catching or intriguing, for...
Read more 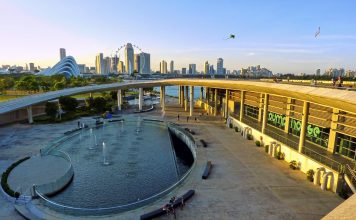