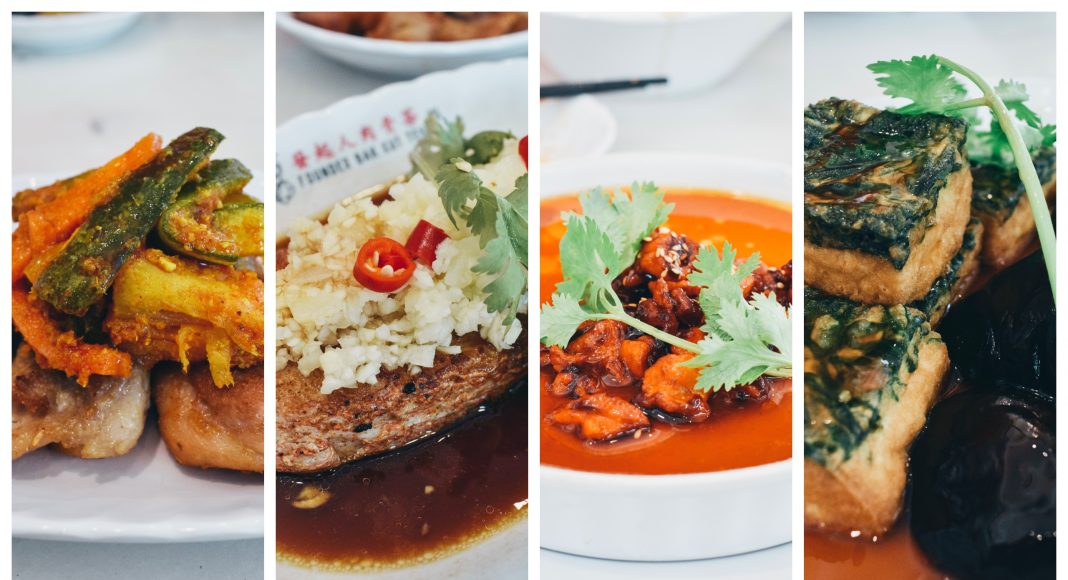 The world of takeaway and delivery is here as dining out is prohibited during this circuit breaker month.

The alternative is to have excellent chefs at home whip up some of the most scrumptious meals.

But what if you could have both?

Long the favourite haunt of many celebrities – Jay Chou to JJ Lin, and even Chow Yun Fat – craving this rich pork bone soup, this humble local establishment has been dishing out bowls since 1978.

Founded by Mr Chua Chwee Whatt, Founder Bak Kut Teh recently launched a new series on their menu, shining a spotlight on his wife and her talents in the kitchen.

Following her passing in 2018, preparing these heritage dishes in Mr Chua’s kitchen is the family’s way of celebrating and honouring her.

Titled Mama’s Home-Cooked Dishes, the individual dishes have quirky names to them, alluding to the interesting stories behind them yearning to be told.

Well, we all love a good story, so sit back, grab that dalgona coffee that you’ve been making, and read what Founder Bak Kut Teh is whipping up. 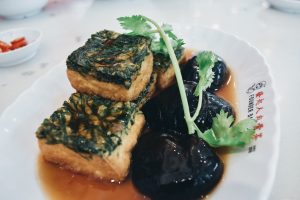 We start off with the most unassuming dish of the day, and I truthfully didn’t expect much from it to be honest.

Named the Cheeky Secret, it was their mother’s way of getting the kids to eat vegetables when they detested them. She would secretly mix spinach and mushroom into her homemade tofu, this made it so the kids gobbled down the tofu unaware that it had vegetables in them.

For how unassuming the dish looked, it was pretty damn delicious.

The tofu had a nice slightly crispy skin which broke open to a silky soft interior that didn’t have that overpowering tofu flavour that I know some people don’t particularly like.

You can clearly see a layer of vegetables on the tofu, but surprisingly there wasn’t much taste of the spinach mushroom combination I was expecting.

For what it’s worth, I would be happily tricked too. All in all, a good starter dish! 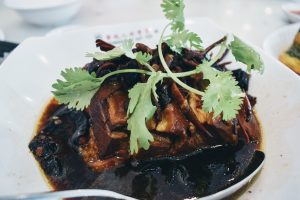 Now, Nigel and his family would often visit his grandmother, and if there was one dish that was universally loved by everyone, it would be the slow-cooked pork belly.

Luckily, the recipe was passed down to Nigel’s mother and now it’s part of Mama’s Home-Cooked Dishes as Grandma’s Pork Belly.

The meat was rather tender, and the fats were melt-in-your-mouth; a good ratio of both in one mouthful will certainly have you going back for more.

Though I’ve certainly had better ones before, Grandma’s Pork Belly at Founder Bak Kut Teh whips up one that is not too bad indeed. 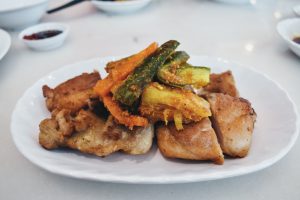 Too Moody To Eat was Mama’s ingenious way to get the kids who were playing all day and refused to eat to sit down at the dining table.

Succulent, tender chicken marinated with a fragrant garlic rub, it’s everything you can ask for in a dish.

Now it seems a little boring that my favourite dish is the pan-fried marinated garlic chicken but trust me when I say it was so damn good. Granted, it’s hard to screw up fried chicken, but it’s precisely because of that that it’s also difficult to make you go wow. 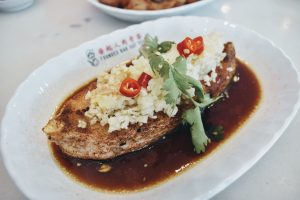 With so many dishes to lure the kids to the table, “Ah Lau” Pan Fried Fish was the dish that enticed Papa.

With an option of fish steak or fish tail, pan fried and topped with a uniquely marinated garlic, the dish is one of the best ones of the series.

The fish was fresh and there was hardly any “fishy” taste or smell, aided greatly no doubt by the heap of garlic and gravy.

Every time Mama would call out “Ah Lau” once the dish was prepared, and heck even I would scurry to the table. 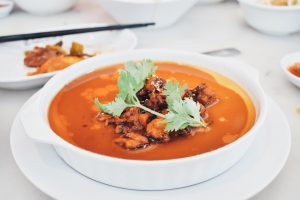 True to saving the best for last, the dish titled Best With Rice is so sinfully good.

The story goes that Papa needed a quick and simple meal before rushing off to work and mixing pork lard with white rice was his fix. Mama would later prepare the trio of eggs to make the meal a little heartier.

Make no mistake, the steamed trio of eggs is good enough by itself, but man, who would ever say no to some pork lard; it gave a nice crunchy texture to the smooth and silky mouthful of steamed egg, and you really can’t get enough of this dish. 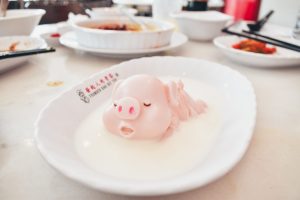 Well, if you’re someone who cannot go without dessert, then Piglet in the Pool is the most adorable dish ever.

So adorable that you may not have the heart to eat it.

Molded into the shape of a cute piglet, it’s a coconut-flavoured pudding sitting in a pool of milk that will end the meal on a nice sweet note.

Founder Bak Kut Teh is now offering FREE DELIVERY island wide with a minimum spending of SGD$30! Orders are available from 10am to 10pm (last order 9pm); simply WhatsaAp Call or Message your orders to 8896 5136 three hours in advance.

The day is not far any longer now folks as Singapore gears up to exit Circuit Breaker come early June.I don’t know about you,...
Read more
Eat & Drink

Hang in there, everyone! You have made it halfway through the circuit breaker period! Continue to stay off the streets, wear a mask when...
Read more
Eat & Drink

4 Cafes to Check Out in Hip Enclave Yeonnam-dong

Koreans love having a cup of tea or coffee, in almost any time. Traditionally, Koreans spent their time at tea houses.Now? Cafes, the answer.The...
Read more