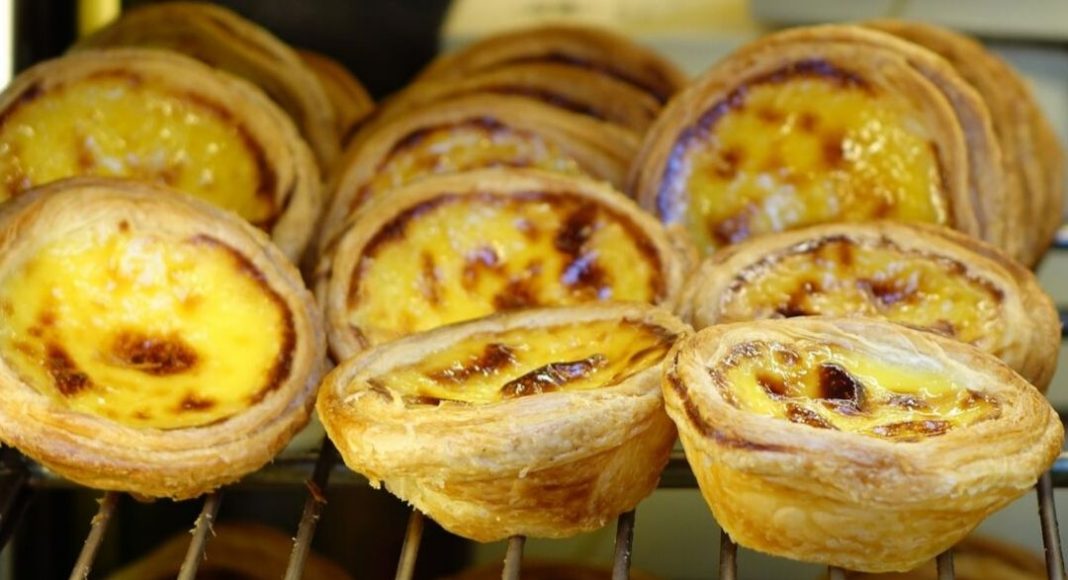 Mention “Afternoon Tea” and the first thought that comes to mind is most likely the high class affair that has so defined the British social custom. I think it’s amazing how such a long-lasting tradition has remained steadfast in British culture.

In Singapore, an afternoon tea differs vastly from that of our British counterparts’. Instead of the fancy decorum and proper scones, we have a variety of sweet and savoury pastries, made according to generations-old recipes. And instead of precisely brewed cuppas, we pair our afternoon treats with local kopi (coffee with milk) or teh (tea with milk), splashed together according to individual tastes.  Yep, afternoon tea in Singapore is rather more casual and fuss-free.

Sadly, numerous establishments serving heritage kuehs from our childhoods have slowly closed their doors over the years. This reflects a troubling narrrative that also plagues our traditional hawker stalls. People are willing to pay upwards of $8 for a slice of (often factory-made) cake at an uppity cafe but yet scoff at the idea of forking out anything more than one or two dollars for our unique local pastries.

It’s a little disheartening no doubt. Lest we forget what a real afternoon tea in Singapore looks like, here’s our list of seven favourite traditional pastries, and where to get them.

Ang Ku Kueh, or “Red Tortoise Cake”, occupies an important place in the Chinese food culture. Moulded in the shape of the tortoise shell, it is believed in Chinese culture that tortoises signify longevity while the colour red refers to good fortune and prosperity.

Today, Ang Ku Kueh does not solely come in the traditional red, but in different colours representing different flavours from black sesame all the way to durian.

Where to go for Ang Ku Kueh

Ji Xiang Confectionery is a household name in the Ang Ku Kueh business, starting in a small kitchen in a HDB flat before setting up shop in Everton Park all the way back in 1988.

Championing the slowly dying trade of making things by hand, Ji Xiang Confectionery trudges along, one Ang Ku Kueh at a time.

When it made an appearance on Netflix’s popular “Street Food” series, Putu Piring caused quite the stir. The controversy – is this humble dish representative or not representative of traditional, authentic Singapore hawker food?

Silly food critics – why are they even arguing? It’s delicious and that’s all that matters.

This round, steamed rice cake filled with gula melaka (unrefined palm sugar) traces its origins all the way back to the Indian immigrants who came to Singapore in search of a better future.

Best eaten freshly steamed and still warm, the chewy outside gives way to the sweet, gooey insides for the ultimate bite.

Where to go for Putu Piring

Fans of the snack will point you to their favourite neighbourhood coffeeshop that still sells them, while purists swear by Traditional Haig Road Putu Piring. This humble stall started out in 1985 and has since switched hands to Ms Aisha Hashim, a second-generation hawker who took over from her family.

Donning a white hijab, Aisha and her colleagues carefully mold the glutinous rice flour into round mounds, their movements like clockwork, a well-oiled machine that churns out Putu Piring day after day.

Swiss rolls are strictly not “traditional” or “Singaporean” by any sense of the word, but I distinctly remember having swiss rolls as a classic snack when I was a young boy.

Wrapped in between the soft, fluffy sponge cake should be a cream that is spread evenly, giving you a perfect ratio of cream to cake with each mouthful. Take a sip of hot kopi during intervals of each bite and you’ve got yourself a decadent tea time.

Nostalgia has a taste my friends.

Where to go for Swiss Rolls

When it comes to old-school Swiss Rolls, Rich and Good Cake Shop takes the cake by far. Their original stall along Kandahar Street was started back in 1997 by a mother-maughter duo and has garnered a loyal following that sees a queue daily.

They pride themselves on their kaya and durian rolls, but with classic fruity flavours like blueberry and mango also on the menu, there’s plenty to love.

This is one stall we are happy to say will be in for the long haul; they recently launched an outlet at Changi’s Jewel. Field reports tell us that they usually sell out by lunchtime!

A perennial classic, Kueh Salat is well-loved throughout Singapore. A two layer kueh featuring a sticky and chewy glutinous rice lower layer topped with a sweet and coconutty custard that get its iconic green hue from pandan leaves. Certain places around mix the glutinous rice with blue pea flowers which gives those nice blue streaks in the rice.

A good Kueh Salat is one with a rich fragrance of coconut and pandan along with smooth custard top and chewy glutinous rice to give a nice contrasting texture with every bite.

Where to go for Kueh Salat

It seems that today there are two movements when it comes to making Kueh Salat – the traditional way and a little modern twist. We start with Tiong Bahru Galicier Pastry that is currently being run by third-generation owner Jenny Soh. Around since the 1970s, this pastry establishment has stuck to its guns and continue to serve up traditional kuehs that see them flying off the shelves right when they open for business. The Kueh Salats here are sold in small rectangular blocks, perfect for small bites.

Recently however, there’s been a slew of pastry shops and cafes that have been turning the humble and small Kueh Salat into a full-fledged cake that has enraptured people all across the island. One such place leading the charge is Chalk Farm. Housed in Paragon, its Kueh Salat has been making waves among food bloggers and on Instagrammer since it opened back in 2013. If you’re looking for a modern take on the all-time favourite, Chalk Farm is the place to go.

Tiong Bahru Galicier Pastry: Tuesday to Saturday from 10 AM – 8.30 PM
Closed on Mondays

A triangular-shaped wrapped glutinous rice dumpling, Kueh Chang is commonly associated with the Dragon Boat Festival. The most popular origin story revolves around the figure of Qu Yuan, a poet and minister who committed suicide by drowning himself in the Miluo River.

It is said that he was well-admired by the locals and people raced out in boats to save him. Unfortunately, Qu Yuan’s body couldn’t be found and the people resorted to throwing balls of sticky rice into the river in the hopes that the fish would eat them instead of Qu Yuan’s body. That gave birth to both the tradition of Dragon Boat racing as well as eating rice dumplings, or Kueh Chang.

There are many versions of Kueh Chang, the Nyonya version typically features braised pork, five spice powder, and candied winter melon. Purists will probably opt for Kee Chang which has no filling and normally paired with sugar or gula melaka (palm sugar).

Image by Jason Goh from Pixabay.

Where to go for Kueh Chang

Kim Choo Kueh Chang is a stalwart in the industry, started all the way back in 1945 under a Banyan tree along Joo Chiat street. Kim Choo specialises in Nyonya-style Kueh Chang and prides themselves in making Kueh Chang the traditional way. This means their products are old-school good, without the distraction of modern influences we see so many other bakeries dallying with in an attempt to capture younger tastebuds.

It is perhaps this stubbornness in retaining its traditional taste and methods counts for its longevity in the vast and diverse Singaporean foodscape.

Egg Tarts are said to hail from the province of Guangzhou, under the genealogy of English custard tarts and Portuguese Pastel de nata.

There are different variations of egg tarts, with some employing a crust that is crumbly while the more common ones feature a buttery flakey crust. Whether it’s the former or latter, the crust encases a smooth and wobbly egg custard which should, ideally, melt in your mouth.

Where to go for Egg Tarts

While Egg Tarts are traditionally not Singaporean, Tong Heng Delicacies is true blue Singaporean. A favourite amongst the locals, and known for their diamond-shaped egg tarts, this humble shop in Chinatown has an 83 year history.

They have since undergone an entire revamp at their Chinatown outlet, employing a modern and sleek outlook. If you ask us though, there was something about the old-school kopitiam (coffee shop) chairs and no frills counter that had so much character and history written in the walls.

Not unlike the Swiss Rolls from before, buttercream sponge cakes are a nostalgic tea time snack for many Singaporeans. Usually a layered sponge cake with buttercream between the layers, the sponge cake is typically vanilla or chocolate with chocolate sprinkles generously heaped on top of the cake.

A well-baked buttercream sponge cake will be light and airy, with the moist buttercream holding the different layers together.

Where to go for Buttercream Cakes

If you’re jonesing for a nostalgic hit, track down a Toastbox outlet near you. Depending on the time of day, you could snag a piece or two of their buttercream cakes.

However, if you are want the full old-school feel, know that there are still many traditional bakeries that do sponge cakes, and Love Confectionery in the Bukit Merah area still retains their original facade and kitchen.

Walking by the bakery, you’ll be drawn in by the smell of fresh bread being baked daily before stopping and looking at a shop front that seems stuck in time. An old couple quietly fills the shelves with colourful sponge cakes; there’s no pretentiousness, just simple, good, and traditional baked cakes.

Ramen, a dish that we all know and love, a dish that some consider the very definition of Japanese cuisine. One of my ultimate comfort...
Read more
Eat & Drink

The Most Beautiful Café In The World Is In Budapest

Is this the most beautiful cafe in the world or a palace? Sitting pristinely on the corner of a street in the downtown area of...
Read more
Eat & Drink

Japan, with all its deeply enchanting lore, traditional and contemporary culture, as well as awe-inspiring natural splendour, is one of the most alluring destinations...
Read more