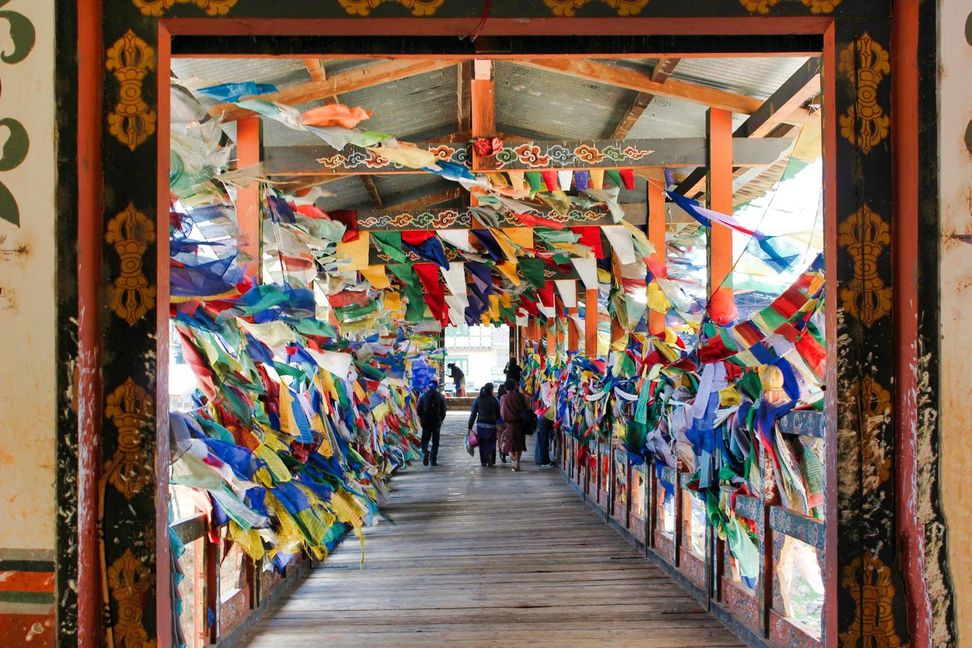 Bhutan, a tiny, population-sparse, and landlocked country in South Asia, is bordered by China, India, and Tibet. Spanning an area of 38,000 km² (54 times larger than Singapore), it has a population of only 700,000 (8 times smaller than Singapore). Even though it is relatively small in comparison to its neighbouring countries, its geographical landscape ranges from alpine Himalayan mountains to humid subtropical forests, to wide valleys carved by slow rivers; a rich biodiversity is sustained by these pristine, untouched environments.

The Way of Zen

Architecturally, Bhutan is known for its breathtaking Buddhist monasteries perched atop a flowing river or by the cliff-edge of a mountain, with elaborate roofs clad in ochre. It’s a place where the land is respected and people are aware of the fact that we are visitors, not masters, of the earth. Indeed, thanks to its assiduous protection of its forests (it is legally enforced that forests must cover at least 60% of the country), Bhutan is not only carbon neutral, but carbon negative, which means that it absorbs more carbon than it emits.

But the country is perhaps most famous for its notion of Gross National Happiness, which measures not only the country’s economic and development standards, but also the state of its cultural heritage, the condition of its environment, and the health of its population.

Little wonder why it is called the “last Shangri La” on earth.

In recent years, Bhutan has been attracting a steady influx of people who wish to experience a different type of life, one divorced from the mindless capitalist mantra of “produce and consume”. At the risk of sounding too Eat Pray Love, in Bhutan, one is able to slow down and reflect on how life should be led, especially in relation to the physical and cultural environment around us.

Yet, for a country that prioritises Gross National Happiness instead of Gross Domestic Product, it might seem incongruous for Bhutan to impose a daily minimum tariff on foreign visitors. Travellers who wish to enter the land of Shangri La have to pay a mandatory amount of money per day; the amount varies according to the size of your group and the month when you visit. In general, it ranges from US$200 to US$290.

Before you balk at this number, know that it covers your accommodation for your entire trip, all three meals, the cost of hiring a Bhutanese guide, all transport internally, and even entry or programme fees for activities and attractions. Part of the money is also used by the Bhutanese government to fund their healthcare and education systems (which are provided free to citizens), and maintain their natural and cultural environment. When put into perspective, the minimum daily tariff now seems less an onerous financial burden but an enlightened approach to managing a sustainable and mindful form of tourism.

Shangri La is not—and should not—be a place where one can zip in and out at will, lest its tranquillity be spoilt. But it also should not be inaccessible, for that would defeat its purpose of paving a future forward for humanity. Bhutan strikes a happy balance between the two by making it compulsory for all visitors to book a package with one of many registered Bhutanese tour operator, which will provide your visa and arrange the tourist tariff, before anyone is allowed to pay a pilgrimage to its land.

Luckily for our readers based in Singapore, Changi Airport is one of the few airports around the region where visitors can take a flight, operated by Druk Air, directly to Paro International Airport in Bhutan. Druk Air also flies to Bangkok, various cities in india, Myanmar, Bangladesh, and Nepal.

Visiting Bhutan might present a tiny bit more hassle than any other destination. But one simply can’t put a price on happiness.

When you think of Okinawa, what comes to your head? To me, I’d thought of it as a resort haven for beach lovers who...
Read more
Travel Stories

Follow my blog with Bloglovin Did you know Wales has the coolest flag in the world? Spot the Red Dragon, one of the first mythical...
Read more