With its beautiful colonial architecture, Malacca is a must-see for every traveller to Malaysia. Located just a few hours away from Johor Bahru and with many buses travelling between the two cities, it’s easy enough that you will be able to make your way there without trouble! If you’re wondering how to go to Malacca from Johor Bahru and what buses to take, don’t worry – we’ve got you covered!

Important to note: There are no direct flights from Johor Bahru’s Senai Airport (Domestic) to Malacca.

If you’re coming from Singapore, you can easily get to JB Larkin Bus Terminal by taking a bus from Woodlands CIQ. The journey will take around an hour and a half.

You can take these bus services at Kranji Station: 170, 170x or at Jurong East Station: 160, to cross the causeway via woodlands. After you reach JB CIQ, take CWL/CW2 to Larkin Sentral. Take note, from JB CIQ onwards you’ll be paying in ringgit. Take note that from 1st June 2022, only cashless payments including EZLink, Nets and ManjaLink are accepted. 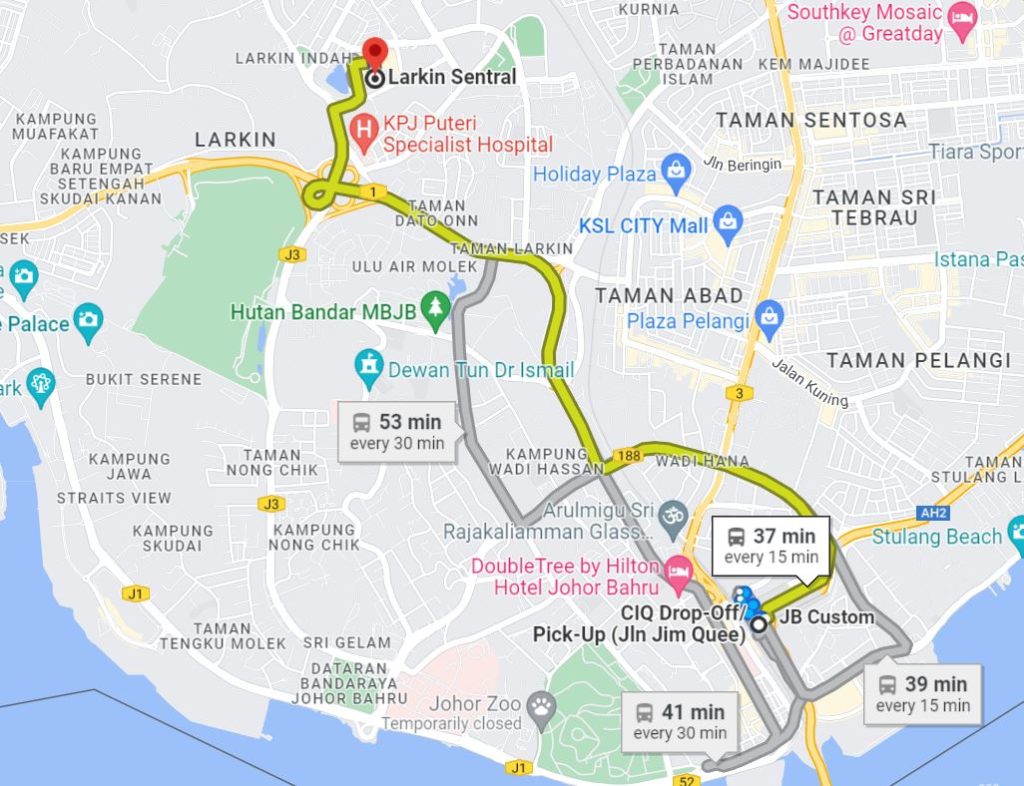 Here’s where you can purchase ManjaLink if you’re commuting frequently from Singapore to Johor Bahru:

To top up the fares in ManjaLink, download the LUGO app.

There are up to 54 bus routes scheduled between JB Larkin Sentral and Melaka Sentral. The first bus leaves at 7:30 a.m., while the last one leaves at 8:00 p.m.

Since there are frequent bus schedules for this route daily, passengers can have the flexibility to choose the travelling time that suits them best. Tickets can be purchased directly from the counters at the bus terminal. A ticket to Melaka Sentral begins at RM22.00 (one-way). However, we recommend that you check and purchase your ticket in advance here.

The journey from Johor Bahru to Malacca takes around three hours, depending on traffic conditions. When you arrive in Malacca, you’ll be dropped off at Melaka Sentral Bus Terminal. From there, it’s just a short taxi or Grab ride into the city centre. You can also change to domestic bus 17 to Malacca Old Town/Dutch Square (Red Square).

And that’s all there is to it! With these simple tips, you’ll be able to easily make the journey from Johor Bahru to Malacca.

👉ICYMI: 5 Places in Malacca to Get Your Caffeine Fix

Plan your next weekend trip to Malacca and enjoy *$8 OFF with promo code <BOLEH8> for hotel bookings here!