At Songkran, Every Splash a Blessing 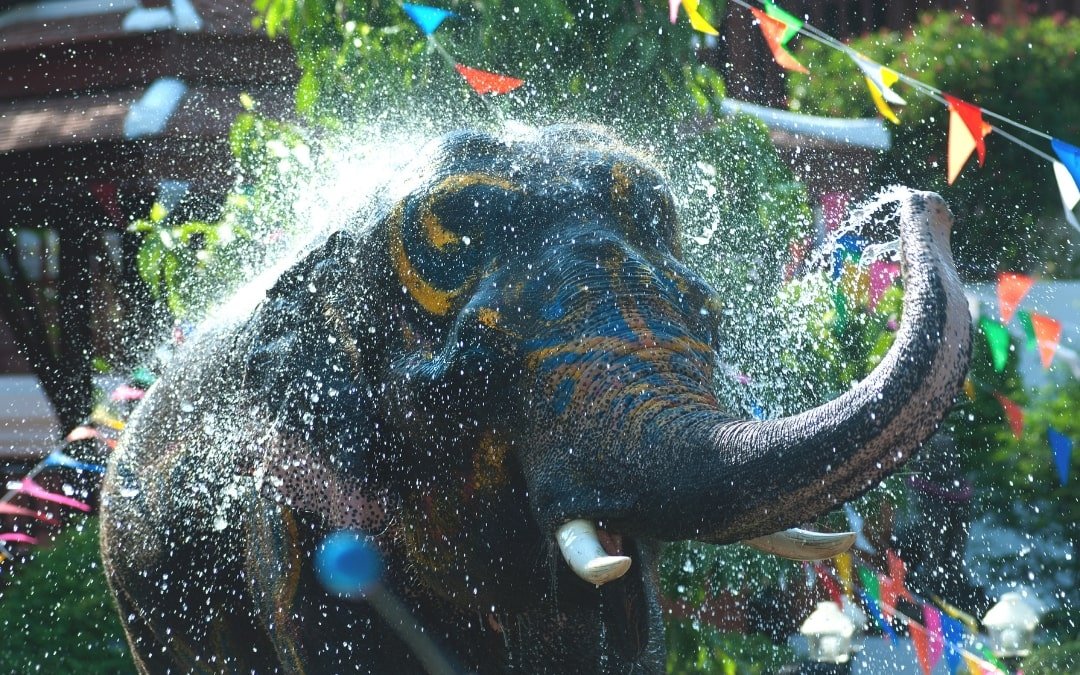 There’s something irresistibly impish about soaking a complete stranger with water. One moment you’re individuals from different worlds. The next, you’re two people sharing a moment in time that started with a cold, wet shock.

Getting soaked by surprise elicits the most visceral (and therefore honest) of all reactions. Any pretense of race, class, gender and politics are washed away in that moment. And when everyone is doing it for the sheer fun of it, there’s only one response – to laugh and join in.

Despite the potential to bring people closer, mass-scale water splashing takes place in precious few locations around the world. Besides the Armenians and their from-the-rooftops downpours; the Dai and their colourful, splashy, religious observance; the Myanmars and the Cambodians’ soaking wet New Years; you’ll be hard pressed to find forgiveness for throwing water in a situation not involving a fire.

But of all the water festivals, the biggest and most famous is also the one we absolutely love – Songkran in Thailand. It is probably the last remaining excuse for grown-ups to run around flopping wet like mad chickens, screeching and laughing like they’ve gone bonkers. And best of all, foreigners are welcome.

Like many who hadn’t experienced it first-hand, I didn’t realise how seriously the Thais take Songkran and their water splashing. I got my first clue as I stepped out of my hotel lift to the sight of a Caucasian family dripping from head to toe.

But I reckoned their downtrodden state was a result of a water fight they chose to participate in. I, however, would choose the path of diplomacy, and if necessary, bribes, to keep myself dry, I haughtily thought.

Three minutes later, when the first gout of water – expertly aimed from a garden hose – sailed into the flimsy confines of the hotel’s tuk tuk shuttle and got me right in the crotch, I mournfully realised participation was compulsory and no mercy would be shown.

As I made my way to lunch, I learnt that hands raised outwards in plea, paired with a suitably hangdog expression, would save me from the worst of the children’s water guns, while dodging into the shops would earn me a temporary reprieve from the older teens who favour the thoroughness of a water bucket.

Between begging and dodging I managed to make it to the restaurant – a homely-looking hut hiding a mindblowing iteration of stir-fried squash blossoms. I was trying valiantly to wipe my spectacles off using a patch of shirt that somehow remained dry, when my Thai friend showed up. In pristine condition and trying too hard not to giggle.

As we ate, I complained that I wasn’t expecting to get this soaked. In their trademark conciliatory way, my friend gently reminded me that splashing water during Songkran is a act of blessing, and that many Thais must have wanted to wish me well for the coming year.

And he was right – I was being a baby.

Deciding to take a different route back to my hotel, I turned into the main street of Silom Road. I knew I was walking into the most popular street in Bangkok for water fights, and braced myself for the mayhem.

But what greeted me first was the sight of construction crews putting the finishing touches on tentage frames overhead, escorted by stern looking firemen astride their vehicles. They must be setting up for a night market or bazaar, I thought to myself.

I was wrong. The sprinklers installed in the frames turned on, spraying everyone and everything underneath with massive sheets of water. The entire street gave up a collective yell.

The sprinklers switched off after a minute, and out came the water guns and hoses and buckets. Which all paled in comparison to the water cannon the firemen were gleefully spraying over everyone and everything.

At that moment, caught in the crossfire, an irrepressible giggle started worming its way through my being. A second later, I was doubled over in laughter as I scrambled to get out of the watery battle royale.

Reaching the relative sanctity of a shopfront, I took one last look back at the unforgettable scene, filled with its mad, wet celebrants.

Then, the sprinklers came back on.

The sheer popularity of the festival, plus its religious and cultural origins has prompted the government to institute special rules during Songkran. In recent years, designated splash zones were instilled in a bid to avoid traffic and safety issues, while reminders over proper attire and behaviour continue to be broadcast.

(Turns out visitors were upsetting the locals with overly-carefree attire and behaviour – such as white clothing that became transparent when wet, or going topless to show off all those hours spent at the gym.)

To be fair, Songkran in its original form was a rather more sombre affair. The festival was derived from an ancient Sanskrit festival which recognises the passing of a new year between April 13 to 15.

An integral part of the festival consisted of pouring scented water over monks. The water, suitably blessed this way, would be collected by devotees and used to anoint or wash family and friends.

Given the Thais’ cheerful nature, and the irrepressibly hot April weather, it is not hard to imagine what started off as solemn ceremony quickly devolving into giggling chaos once away from dignified grounds.

And since you can’t stay mad during a water fight, it’s no wonder the practice caught on. Songkran is today a world renowned cultural event that sees more and more foreigners visiting just to get a slice of the action.

The international appeal of a festival like Songkran cuts across all borders; it’s a simple proposition that needs no lengthy explanation.

For one glorious weekend in a sun-scorched, overcrowded metropolis, every moment carries the seed of an epic water fight; every street corner or market square could turn into a giant waterpark; every tap, hose and bucket could become a rallying point. You’ll make so many new friends. And the bar to play is set invitingly low. Just signal your intention with the most colourful water gun you can find (the streets will be lousy with them), and grin when you spot your targets.

Then, in Bangkok’s famous 42 degree heat, when the shockingly cold water hits you (the veterans spike their ammo with ice) just let go and let the simple joy of simpler times wash over you. And then fire back, reload, and brace yourself for the next salvo.

Rinse and repeat until the whole world washes away, leaving behind nothing but laughter and friends in the reddening sunset.

Best Things to Do in Sentosa, Singapore – A Visitor’s Guide

Best Things to Do in Taipei – A Beginner’s Guide

When is the Best Time to Buy Travel Insurance?