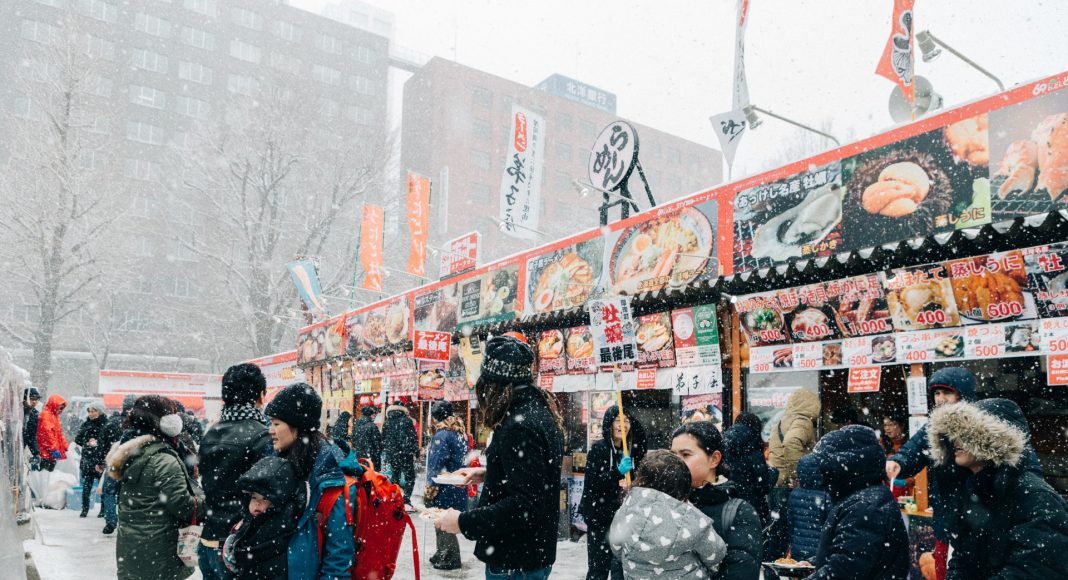 Here’s Where to Spend an Unforgettable Christmas in Japan

If there’s one country that Singaporeans religiously love to go on a holiday, it’s the east Asian country of Japan. Whether it’s the food, culture, or scenery, Japan offers something different every season, and promises to captivate you at every turn.

While Japan isn’t a Christian country by any stretch (Christmas isn’t even a public holiday), the festival is still celebrated by many across the country. The streets and parks across the various cities come to life with beautiful light installations, and has been globally acknowledged as among the best in the world.

From Hokkaido to Osaka, Christmas markets and dazzling colourful light shows, to an eating tradition that I still can’t fathom exists, here’s how and where to spend an unforgettable Christmas in Japan.

The northern prefecture of Hokkaido is no stranger to winter festivals and being a holiday hotspot come wintertime, world-famous ski resorts are open for business and onsen towns become even more bustling.

Consisting of some 160,000 lights spread all over the city, the Hakodate Winter Festival is a large-scale winter event that mesmerises with light shows and fireworks. The Hakodate Illumination forms the foundation of the festival which transforms the city into a dazzling display of endless fairy lights.

Your first stop would be the sloping streets of Hachimanzaka and Nijukkenzaka, famed locales of the illumination festival, where the trees lining the pathways are lit up, turning the streets into a gorgeous photo-op. Save another night to visit the iconic and historic Fort Goryokaku, Japan’s first western-style citadel. The 1.8km star-shaped moat lights up the night and you can take a stroll along its perimeter or scale up the adjacent Goryokaku Tower for the best vantage point and views as soft snow slowly descends from the sky.

Running for 38 years now, the Sapporo Winter Illumination is a winter institution and a tradition for the capital of the Hokkaido prefecture. The main show takes place in Odori Park with small and large installations featuring glittering lights draped all over the trees and throughout park.

Starting out in 1981, it was Japan’s first ever winter illumination, and has grown from a thousand-light event to some 520,000 lights today. A massive and beautiful light show, the Sapporo Winter Illumination deserves a visit and is one of the best places to spend Christmas.

All that said, if there’s anywhere that will put up some amazing light shows, you know it’ll be Japan’s capital of Tokyo. Arguably modern Japan’s heartbeat, Tokyo is a buzzing city awash with life and excitement. Come winter, you know Tokyo will put on a show, and put on a show they have.

One of the most popular light shows in all of Tokyo, the Caretta Shiodome Winter Illumination is one of the capital’s best, a 250,000 LED light show that turns the Shiodome into a colourful and stunning kaleidoscope of lights that will amaze anyone.

With themed collaborations with popular Disney movies in years past such as “Beauty and the Beast”, “Frozen”, and “Tangled”, the Shiodome Illumination has attracted at least half a million visitors annually. This year, Aladdin will be the Disney movie of choice, even featuring iconic songs like “A Whole New World”.

The light shows and display typically last until Valentine’s Day, so you don’t have to fret if you’re not in town during the festive season.

A bit out from left field here, but consider taking a short trip out of Tokyo to Enoshima Island for one of the longest running illuminations in all of Japan. Since its inception in 1999, the Jewel of Shonan has been considered one of the three great winter illuminations in the Kanto Region.

Celebrating its 20th anniversary this year, you can expect the Jewel of Shonan to be the biggest to date, featuring romantic and dazzling lights that cover the island, including the Enoshima Sea Candle, the island’s iconic observation tower.

What makes Enoshima truly special however, are some 20,000 tulips that only bloom in winter. Come nighttime, the tulip garden lights up, making for quite the spectacular display.

One of the biggest winter illuminations in all of Kyoto, the Rohm Illumination is an annual tree light up tradition sponsored by ROHM Semiconductor, a Kyoto-based company specialising in semiconductors.

In a bid to give back to society, the company decided to light up the entire area around its headquarters for Kyotoites. Named the Promenade of Light, the tree-lined Kasuga street turns into a bright stretch of burning orange that illuminates the night sky. The nearby Nagura Park is also beautifully lit, owing to the entire grounds being outfitted with LED lights.

Japan’s oldest public botanical garden gets its own Christmas light up as well. The Kyoto Botanical Gardens puts up some 100,000 LED lights that line the trees and flower gardens throughout the forested grounds. With a greenhouse that is open during night time for viewing, visiting the botanical gardens has become somewhat of a Christmas tradition

While the light shows in Kyoto aren’t as large as the ones you see in Tokyo or Osaka, they have a certain charm or even magic to them, something you can enjoy firsthand if you’re  lucky enough to be in Kyoto during Christmas.

Another popular activity you’ll see popping up is Christmas markets, and the Osaka German Christmas Market is one place where you can immerse yourself in all the winter festivities and the Christmas spirit.

And it’s quite a spectacle indeed – rows of German huttes (huts) circle the prominent Shin Umeda City Christmas tree with lights and colour that make the entire market pop. Here you can find a vast array of goodies from little trinkets and ornaments to pastries and sausages. It’s definitely not the same as Christmas markets in Germany or Europe, but in some small moments, you question if you’re still in Japan.

This isn’t a place or event like the others, but it’s a Christmas tradition that cannot be ignored.

Japan’s culinary world is diverse, complex, traditional, and above all else, delicious. Their attention to detail is impeccable, resulting in some of the best food you can find in the world.

Imagine my surprise when I found out that the Japanese have a unique eating tradition come Christmas every year – Kentucky Fried Chicken (KFC). Yes, that major American Fast Food Chain has become somewhat of a ritual for families celebrating the end of year holiday.

It’s puzzling to say the least that a country with so much culinary history and prowess gathers to eat a bucket of fast food fried chicken. This is Japan’s idea of a turkey dinner, and it was all birthed from KFC’s 1974 marketing campaign, Kurisumasu ni wa Kentakkii, or Kentucky for Christmas, that filled the void for the Japanese as celebrating the western tradition was never really a thing.

Little did the fast food giant know that it’s campaign would take root and grow into the popular phenomenon it is today, participated by millions of Japanese, going as far as pre-ordering KFC’s special Christmas dinner!

Just a quick side tip, it’s relatively not recommended to travel to Japan during the last week of December and the first week of January as it’s typically the busiest travel period in Japan. This would mean that it would most likely be difficult to reserve transportation and accommodations, so it’s encouraged to avoid these two weeks.