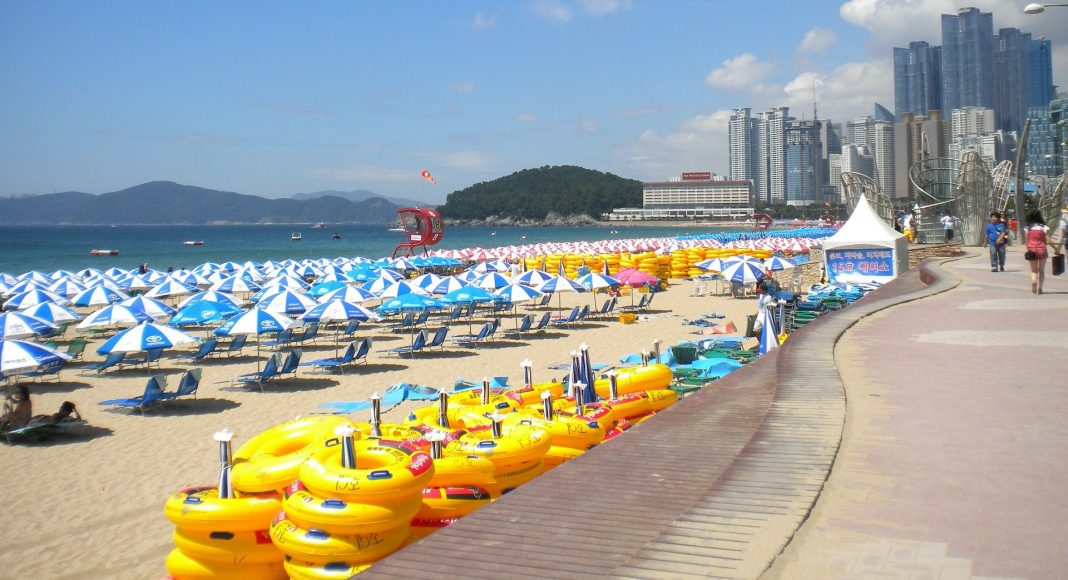 This post is brought to you by Korea Tourism Organisation.

I believe most of us would be familiar with dazzling and hypermodern Seoul, the capital of South Korea. If you think that’s the best of South Korea has to offer, Busan would prove otherwise.

Located on the Southeastern tip of the Korean Peninsula, Busan is more than just a coastal town, it’s a charming seaside city replete with modernity, culture, creativity and nature.

When I first arrived in Busan with my friends, we went straight to Haeundae Beach at dusk, and I can see why this port city has earned its nickname as the Miami of South Korea. A mixture of commercial and residential oceanfront property rising along the coastline, and come summertime, you will find parallel lines of beach chairs and parasols on the beach.

The atmosphere feels different here. Is it the sound of the gentle waves, the sand beneath our feet, or perhaps the cobalt blue water?

Even on our way to Haeundae Station, we could hear the seagulls calling. No, it is not our hallucinations, the train station actually plays the audio to remind passengers that they are fast approaching Haeundae beach.

Welcome to the beachy urban paradise.

Shimmering skyscrapers rising along the coastline, historic temples nestled among the hills, an abundance of natural hot springs, as well as charming art streets, this is Busan’s undeniable charm – laidback yet intriguing enough to make you stay.

Usually, Koreans and tourists alike take a trip down south to Busan for a relaxing getaway. In my experience, a day trip to Busan from Seoul would be too hectic. With plenty of amazing things to enjoy here, Busan deserves more than a night stay. You need at least 4D3N, make no mistake about it, this is a place to unwind, be it soaking up the sun or spending the entire afternoon hopping from one café to another, and seafood lovers would intuitively know where to go for the catch of the day.

I’ll begin with Haeundae beach as it is synonymous with Busan. Even before I heard about the blockbuster ‘Train to Busan’, Haeundae is a word I’ve come across every time I read about Busan International Film Festival, which is the most significant film festivals in Asia.

Every October, the star-studded festival takes place at Haeundae beach, earning it the nickname ‘Cannes of South Korea’. Besides its glamorous status, Haeundae beach is also the nation’s favourite hotspot all-year-round. It’s where the local sunseekers and partygoers hang out.

While Asia has no lack of sun–kissed paradise, what makes Haeundae special is the ever-changing horizon set against the shiny backdrop of downtown Busan. Be it sunrise or sunset, both are the ideal time to stroll the beachfront path, enjoy the ocean breeze and take in the sights of Haeundae’s sprawling urban landscape.

In Singapore, we don’t get to have much access to the beach, so Haeundae is worth making a pitstop for as it is very much a Busan experience. You can easily spend the entire evening in Haeundae beach to relax and be inspired by elements as simple and beautiful as the sand and ocean.

There are popular eateries nearby Haeundae beach depending on your budget. To get a taste of local snacks, head over to Haeundae Food Alley, but if you prefer to dine with a view, then The Bay 101 is the place where trendy Busanites will frequent.

There is no room for boredom in Busan, if you think you have seen the best of Haeundae, you can try Gwangalli beach which is only a few stations away.

Gwangalli beach is famous for its vibrant nightlife and the iconic Gwangan Bridge, which runs over the sea parallel to the beach. What makes Gwangalli beach so remarkable to me was the spectacular light and sound show coming from the Gwangan Bridge. Every evening, the suspension bridge will be illuminated and many would gather by Gwangalli beach to marvel at the animated bridge lights and colours.

Apart from the visual feast, I’ll like to point you to Galmegi Brewing Co., which is a stone throw away from Gwangalli beach. The American-style pub is adorned with artworks from local artists and has multiple outlets across the city. It is famed for its local craft beer and jovial atmosphere. Don’t leave without trying Galmegi IPA.

I thought East Asia is all about tea, but ten minutes into Busan, I was wrong. This city loves coffee.

While Seoul has Seongsu-dong which has been revitalised and emerged as a stylish retail hotspot, meet Busan’s up-and-coming trendy enclave – Haeridan-gil Road. Otherwise known as Busan’s Instagrammer playground.

Its proximity to Haeundae beach only means that there are more tourists like us exploring this creative neighbourhood. One might think, is this another overrated site? But let’s not pass judgement of a place too quickly. After all, a city is designed to suit its citizens first.

The nondescript facades and shopfront with alfresco seating, under this breezy weather, for a second, I thought I was in a stylised version of Copenhagen. This neighbourhood is teeming with cafes and homegrown lifestyle stores.

And if you are like me, who is always on the lookout for good coffee spots, then Haeridan-gil Road will not disappoint. For matcha tea drinkers, there is a quaint café that specialises in matcha beverages and desserts, and oh – you will be greeted by a furry cute shopfront manager, which is the owner’s cat.

You can easily spend the whole afternoon exploring the cafes, colourful knick-knack shops and tiny bakeries. Below are some of the cafes and bakeries that are popular among the locals.

This place needs no introduction, you would have seen it all over Instagram. Gamcheon Culture Village has earned a few nicknames such as the Machu Picchu of Busan, Santorini of the East and even Korea’s Cinque Terre.

For me, after conquering multiple flights of stairs to find the best lookout point and photo opportunity, I’d like to call it Busan’s Lego Land. The vista of colourful houses nestled on the hillside overlooking the sea is indeed a pretty sight. As a fan of The Little Prince, this place is even more meaningful to me and as soon as you enter the village, you will be overwhelmed by the handicrafts shops, street art, and locally-owned cafes and street food carts.

Can you imagine this used to be a slum for the refugees during the Korean War?

Formerly an impoverished and reclusive district, today, Gamcheon Culture Village is the most vibrant art and cultural hotspot in Busan. It has welcomed nearly 100,000 visitors last year. It is, without a doubt, the top sight in Busan attracting visitors from all over the world. No trip to Busan would be completed without posing for a photo here.

And if you ever wondered how Gamcheon Culture Village looks like after sunset, hop onboard the Busan Night Tour which will bring you to see the best of the city after dark.

This is the largest fish market in South Korea which puts Busan on the pedestal as the best place for seafood lovers. Jalgachi Fish Market is located right next to port and it is impossible to miss its buzzing presence. The entire district is devoted to the city’s love for seafood and is mostly run by women called ‘Jalgachi Ahjumma’. The majority of the restaurant owners and chefs in Busan will purchase their ingredients here.

Jalgachi Fish Market comprises two key sites. You can either visit the seven– storey building or make your way to the open outdoor market. In either location, you can pick your ocean delicacies along with a restaurant; your meal will be served in minutes. It’s a quintessential Busan experience! If your budget allows, this could possibly be the freshest and largest seafood buffet you could ever ask for!

5. A Historic Temple by the Sea

Historic temples are part of Busan’s landscape, however, there is one which left a deep impression on me and that is Haedong Yonggung Temple. Why? This is because most of the temples in Busan are up on the mountains and this is the only one that overlooks the sea.

I’m not sure if it’s largely due to the rise of Instagram, but this ancient temple now attracts tourists from all over the world to marvel at the country’s only temple by the sea.

Granted, there are many temples and shrines throughout Asia but there is nothing like this. Legend has it that the temple was built in 1376 and was originally known as Bomun Temple. Magnificent and skilfully constructed on the hillside, it is a mesmerising sight to behold, especially with the waves lapping at the foot of the hill.

For anyone who wish to experience the sensation of walking on water without getting drenched, here’s where you need to go in Busan.

Be warned, Oryukdo Skywalk is not for the faint-hearted and those with a fear of heights. As its name suggests, the glass bridge is perched on the coastal cliff at 40 meter high. The bridge is constructed with glass to simulate the experience of walking in the sky or figuratively, above waters. Just don’t look down too much!

Is it a tourist trap? Not at all. Admission is free. You simply need to layer up and be patient while you’re there to find a good spot for the ‘gram. The entire walking trail only requires 10 minutes to complete.

Time to kick back and relax in South Korea’s largest upscale spa facility. The Koreans already knew this is a necessity and even more so in the age of productivity and digital hyperbole.

Featuring 18 hot baths that are fed with natural spring water from underground, you can happily spend up to half a day here (early bird discounted rates available for morning and late-night sessions).

Busan is arguably one of Asia’s most underrated city as it has often been overshadowed by Seoul. But with this list, I hope you’ll be enticed to explore Busan on your next trip to South Korea. 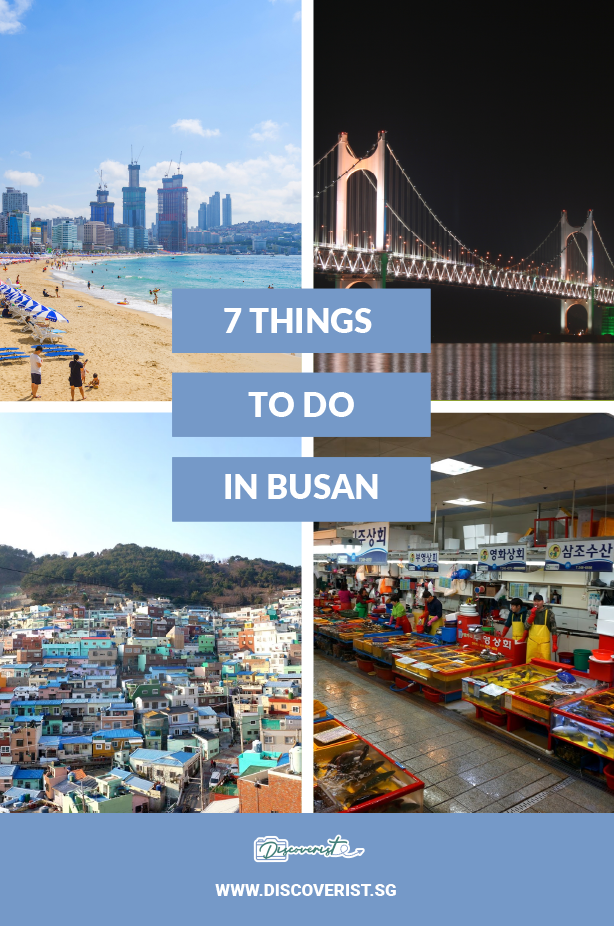 Travelling is still a miles away as every country juggles reopening their economy and borders along with the potential of a second wave hitting.Singapore...
Read more
See & Do

France has a vast expanse of wine regions, from the three pillars of French viticulture of Champagne, Burgundy, and Bordeaux to the UNESCO World...
Read more
Kuala Lumpur

Have we all realised the importance of movies in our lives after being confined at homes for months? Things like Netflix, Hulu, HBO allow...
Read more