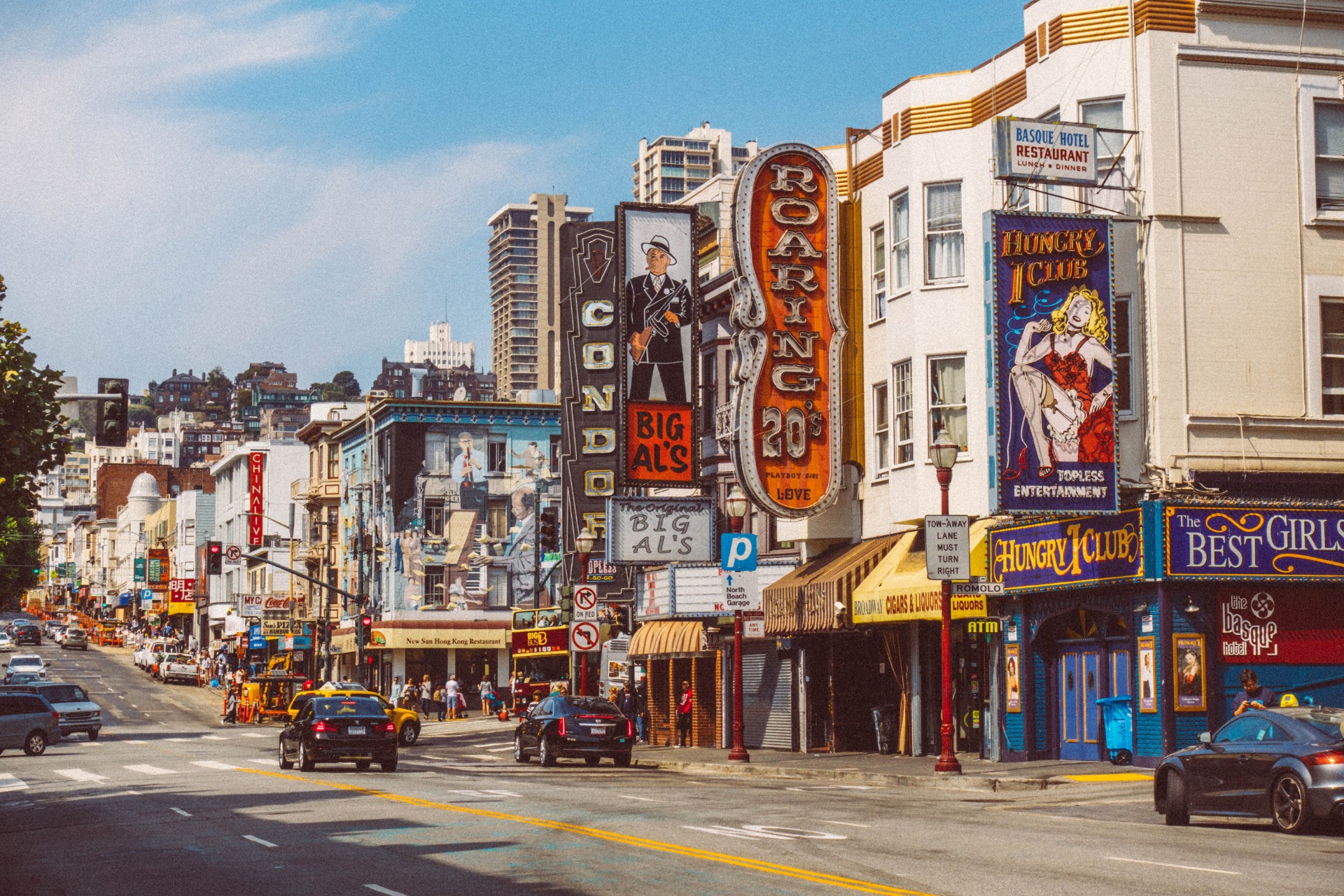 San Francisco has long been one of the American states that has been rather inclusive and open to various other cultures. One of the advantages that this brings is an incredibly diverse foodscape originating from a multitude of ethnic backgrounds.

The eclectic mix of food makes exploring the city through food a must, and an exciting experience at that. Whether you’re a first-timer or seasoned traveller, here are some can’t miss food when you’re in the western coastal city of San Francisco.

I mean, it’s still an American city, so it’s only fitting that we start off with a true blue American fast food chain. Well-loved across the country, In-N-Out is no strangers to snaking long queues and packed outlets.

Often part of a nationwide debate alongside Shake Shack laying claim to serving the best burgers in the country, In-N-Out has cultivated a loyal legion of fans. For me, I’d always liken the latter to a place where you go to get a good old classic cheeseburger while Shake Shack has a tendency to innovate more with their flavours.

Their menu is simple, only featuring three kinds of burgers and fries. The Double Double is probably their most popular option, featuring the classic cheeseburger with two American beef patties, lettuce, tomatoes, and onions.

What makes In-N-Out stand out are their off-the-menu items like their animal-style fries. This highly touted version of fries comes topped with cheese, grilled onions, pickles, and held together by a secret sauce.

Let’s just say it’s not somewhere to go if you want clean, healthy eating, but boy is it delicious.

Bubble tea is running the world guys (yes even in the States), where it’s generally referred to as boba.

With a strong Asian presence in San Francisco and really in the larger Californian state, it’s not all too surprising for bubble tea to carve a space for itself. 9 years ago, at the start of the decade in 2011, friend duo Andrew Chau and Bin Chen bonded over a game of table tennis, which unexpectedly led to opening a shop with a focus on bubble teas.

And now, as we usher in the next decade, the Boba Guys has grown to become one of America’s beloved bubble tea brands, aided in no small part due to their quirky Instagram captions and colourful tasty cups.

The Boba Guys eschew artificial sweeteners and processed powders, opting for Straus organic milk sourced from the Bay Area, and make their syrups in-house. With freshly brewed tea daily and jellies made from scratch, the Boba Guys are one to try for sure, especially if you’re craving for some legit Taiwanese bubble tea.

Talking about Asian influences, it doesn’t get any better than Chinatown. I kid you not, when I entered the borders of Chinatown in San Francisco, I felt like I was transported to China. Chinatown in the city was more Chinatown than back home in Singapore, and we are a predominantly Chinese society.

There’s a bevy of choices in Chinatown and dim sum would be one of the best offerings you can go with. Whether you’re looking for a quick grab-and-go in the form of Golden Gate Bakery (we hear their egg tarts are fantastic), or fancy a little more of a sit-down with a cup of tea, Lai Hong Lounge or Yank Sing (known for their xiao long baos) would do the trick.

🎁Ocean Beach Sea Salt Caramel Sundae with a small holiday twist🎁 • We grabbed one of our favorite sundaes at Ghirardelli in Disney California Adventure…and to put a small holiday spin on it, we topped the sundae with a delicious Ghirardelli Squares Peppermint Bark!! • This sundae has vanilla ice cream, sea salt, caramel sauce, hand made hot fudge, topped with whipped cream, and is also normally topped with a Ghirardelli Squares Milk Chocolate piece. Since they were handing out the Peppermint Bark squares at the register (to commemorate the season!), we figured we would give it a try with the sundae! It added a great hint of peppermint flavoring to the sundae! This sundae is COMPLETE PERFECTION!! • Follow us to @ghirardelli in Disney California Adventure! Your visit is way overdue!!

Today, the impressive chocolate factory has been reduced to nothing more than a little store and eatery. Don’t mock its size though as their chocolate still retains the luscious velvety quality of its heyday. From ice cream sundaes to their signature chocolates, don’t miss out on Ghirardelli Square.

The first waft of freshly baked bread emanating from the kitchen’s wood fired brick oven was back in 2002. 18 years on and Tartine Bakery has melted the hearts of people one bite of a pastry at a time.

This near two decades has allowed Tartine Bakery to reach a sort of cult status amongst the locals as one of the top, if not the top bakery in San Francisco, if the 30-minute queues aren’t indicative enough.

Bite into their croissant which sports a supremely flaky exterior hiding soft pillowy layers within, and suddenly the angst of queueing vanishes as you devour the buttery pastry. The Morning Bun is perhaps an elevated croissant, made from traditional laminated croissant dough that is rolled and topped with sugar, orange-zest, and cinnamon. This one’s a crowd pleaser for sure.

Smitten Ice Cream is where you go in San Francisco if you want some of the creamiest and freshest ice cream in the Bay Area.

Part of Smitten’s exponential growth over the course of the decade is due to owner Robyn Fisher and her ground-breaking machine which churns out fresh ice cream in 90 seconds. Fisher’s homemade ice cream was made upon order, flash-frozen by way of liquid nitrogen, resulting in smaller-sized crystals giving the ice creams an extra creamy texture.

Smitten today is close to a household name in San Francisco, serving up rather unique flavours that ranges from spiced apple pie to brown sugar with cinnamon shortbread. With 5 outlets spread across the state of California, it’s not that hard to get your hands on a cone of Smitten Ice Cream.

Who's hungry for this spread from JBF America's Classics winner @lataqueriasf? Let us know in the comments below which dish you'd rather have: carnitas and chorizo with chips and guac or a crispy quesadilla? 🌮❤️🌯 #jbfa (📷: @ommmar)

San Francisco can be said to be a city that is obsessed with burritos, and when it comes to Mexican burrito culture in San Francisco, there’re not many better representatives than La Taqueria.

One of the oldest establishments on this list (operating since 1973), La Taqueria has been at the heart of the Mexican culinary cuisine for at least 3 decades now. Owner Miguel Jara employs traditional recipes that features ingredients from avocado to pulled pork confit and chipotle chorizo chicken. Every bite of a burrito is sure to be an explosion of flavour, one that will leave you grasping for more.

Regardless if it’s his heart-warming personality or his attention to detail, Jara’s stewardship has resulted in La Taqueria constant mainstay on the top food lists of Eater SF and other burrito rankings.

Food Trucks are a culinary heritage in San Francisco, and I’d consider it a crime if you were in town and not try food from a food truck. Eating from/at a good truck is more than just a meal, it’s a culinary experience.

Before the mass media hype and proliferation of food trucks that you see today, there have been stalwart food trucks operating in San Francisco back in the day. El Gallo Giro and Tacos San Buena are two beloved Mexican taco trucks that have been serving up tacos at USD$2 per piece(!), which is insane if you think about food prices today.

For a more modern take, head over to SoMa StrEAT Food Park which features a collection of various food trucks selling a whole bunch of food from different cuisines. Or catch up to Off The Grid, a roaming food truck festival that sports over 60 events every other week – the people of San Francisco sure love their food trucks.

Calling the culinary foodscape of San Francisco diverse at times feels a little of an understatement. With a smorgasbord of various cultures and cuisines all mishmash into what can only be defined as San Francisco, it’s culinary magic at its finest.

7 Basque Burnt Cheesecakes In Singapore Worth Every Sinful Calorie

There’s still plenty of time left before 2020 comes to an end, but Basque burnt cheesecake has solidly vaulted to the top of Dessert...
Read more
Recommendations

Travelling is still a miles away as every country juggles reopening their economy and borders along with the potential of a second wave hitting.Singapore...
Read more
See & Do

France has a vast expanse of wine regions, from the three pillars of French viticulture of Champagne, Burgundy, and Bordeaux to the UNESCO World...
Read more