Getting Around Thailand: Easy Tips On Taking Public Transport 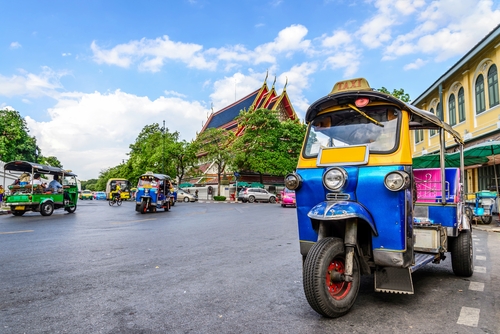 Transportation in Thailand can be chaotic and overwhelming for the average traveller, but the key to overcoming this is to just disregard the chaos and enjoy the unique experience! If you are travelling between the major cities of Thailand, the first option will be air travel. With the advent of budget carriers, air travel has never been more affordable. Air tickets for the main trunk routes from Bangkok (Phuket or Chiang Mai) can be had for as low as THB460 (SGD18) almost the same as a taxi ride from Bangkok airport to the city! Although air travel is a quick and fuss-free way to reach your destination, it can be mundane.

For a more authentic Thai experience, we recommend exploring the country by train. One may be taken aback by the seemingly archaic locomotives, but the rail system is actually extremely comfortable and safe. As you traverse across the Thai rainforests, you will be rewarded by the spectacular view of countryside mountains and the villages that accompany it. Watching the sunrise or sunset on the trains can be a romantic experience for couples too.

The primary mode of transport for locals is via the bus. There are bus services for travellers with every budget: From the super cheap but cramped non-air-conditioned buses to the luxe VIP buses with personal televisions and massagers. Generally, there’s no need to pre-book your tickets. You should be able to grab a seat just one or two hours before your travel. However, to be on the safe side, if you’re travelling during the peak seasons you can go ahead and pre-order tickets.

When in the cities, the tuk tuk is an awesome way to get around. These open-air motorized rickshaws are generally cheaper and much faster than taxis. They are small enough to weave through the busy Bangkok traffic. However, be warned: There are some tuk tuk drivers who can be dishonest, targeting unassuming tourists. Always check on the price, and make sure the driver acknowledges your end destination. There are black sheep everywhere, so just be careful, and don’t let this minority of drivers put you off trying the tuk tuk.

Plan your next weekend trip to Bangkok and enjoy *$8 OFF with promo code <SUAYMAK8> for hotel bookings here!